Article-Type of This Article
Observational Study

Gastric cancer is a common malignant tumor. Early detection and diagnosis are crucial for the prevention and treatment of gastric cancer.

To develop a blood index panel that may improve the diagnostic value for discriminating gastric cancer and gastric polyps.

Five tumor-related detection indices, 12 clinical biochemical indices and 1 cytokine index showed significant differences between the gastric cancer and gastric polyp groups. Carbohydrate antigen (CA) 724, phosphorus (P) and ischemia-modified albumin (IMA) were included in the blood index panel, and the area under the curve (AUC) of the index panel was 0.829 (0.754, 0.905). After validation, the AUC was 0.811 (0.700, 0.923). Compared to the conventional index CA724, the blood index panel showed significantly increased diagnostic value.

We developed an index model that included CA724, P and IMA to discriminate the gastric cancer and gastric polyp groups, which may be a potential diagnostic method for clinical practice.

With further research, finding a simple, fast and easy dynamic observation method that can screen high-risk groups of gastric cancer (such as patients with atypical hyperplasia) would be beneficial for early diagnosis, and serum biomarkers (tumor markers, combined screening of cytokines and biochemical indicators) may be new targets for the early diagnosis of gastric cancer. Tumor markers reflect the occurrence and development of tumors and the degree of activation or inactivation of tumor-related genes. Since these substances are secreted by tumor cells and released into the blood and body fluids during tumor proliferation, they can be used to indicate the presence of tumors[6,7]. An ideal tumor marker has the characteristics of high sensitivity and high specificity, is present in body fluids, especially blood, and is easy to detect. In recent years, due to the rapid development of molecular biology, markers related to gastric cancer have been continuously discovered. The cell surface structural antigen carcinoembryonic antigen (CEA) is a tumor-associated antigen that can be extracted from embryonic tissue and detected in a variety of body fluids. As one of the most common tumor markers, it is widely used as a diagnostic and monitoring index for various gastrointestinal tumors (especially gastric adenocarcinoma)[8-10]. Carbohydrate antigen (CA) 724 is a high molecular weight glycoprotein and one of the best tumor markers for the diagnosis of gastric cancer. CA724 is highly specific for gastric cancer and has good application value in digestive system malignant tumors[10-12]. In addition, cytokines also play important roles in the initiation and treatment of cancer. Cytokines produced by tumor cells or the tumor stroma can stimulate the survival, proliferation, and metastasis of cancer cells. These factors were demonstrated to be potential biomarkers for various cancers[13-15].

SPSS 22.0 was used in this study. Measurement data are expressed as the median (25%, 75%). If the data were normally distributed, they were compared by two independent samples t tests. If not, they were compared by the rank sum test. The area under the curve (AUC) was used to evaluate the diagnostic value. Univariate and multivariate analyses were used to analyze the Exp (B) of the indices. Logistic regression analysis was used to build the index model. Z scores were used to compare the AUCs of the two groups. 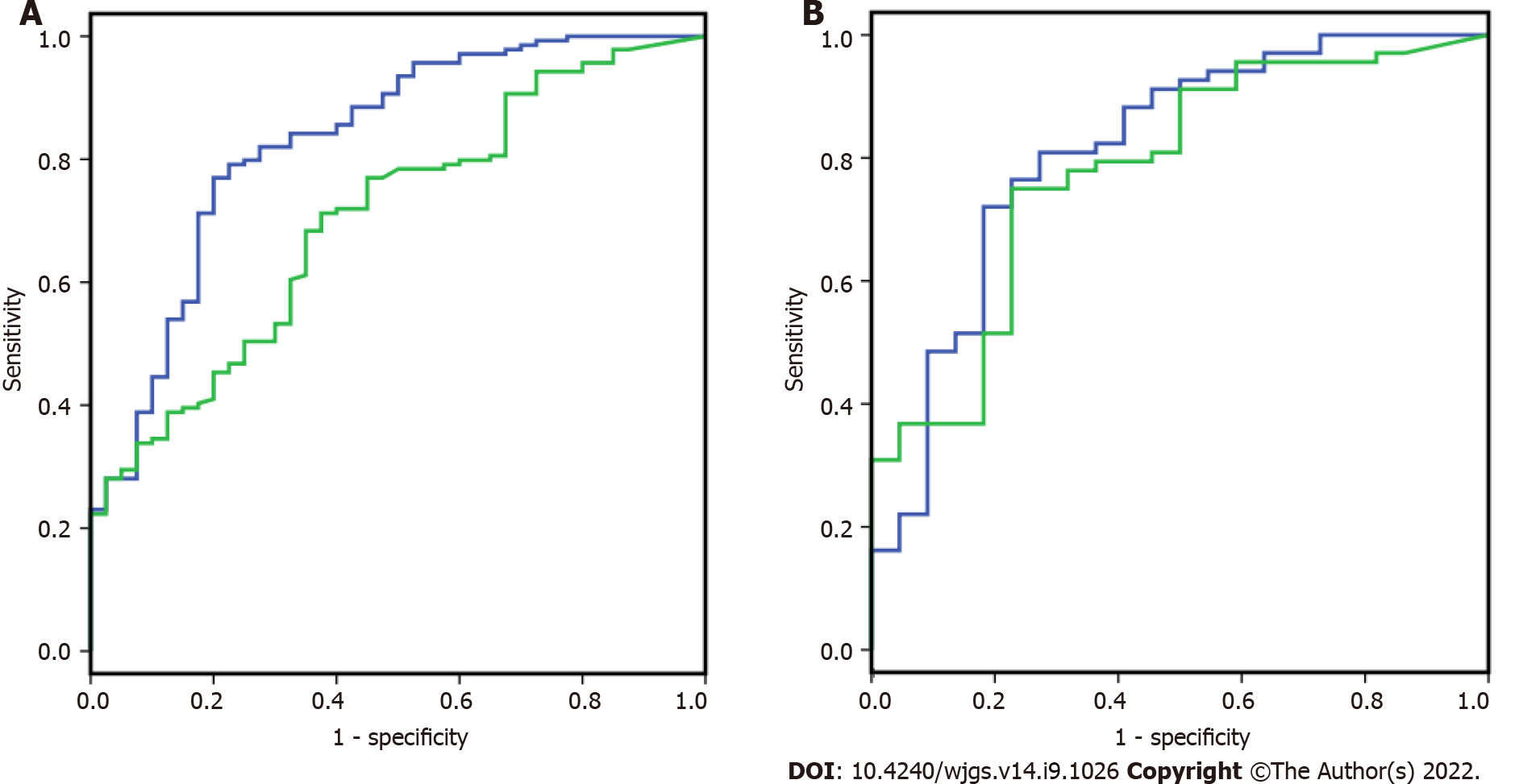 The pepsinogen PG is a protein polypeptide chain composed of 375 amino acids, which can be divided into two categories according to biochemical and immunological properties: PG I and PG II. PG I is mainly synthesized by chief cells and cervical mucous cells, while PG II can be synthesized by gastric antrum mucous cells and proximal duodenal Brunner glands, in addition to chief cells and cervical mucous cells[16]. Synthesized PG I and PG II are mainly secreted into the gastric cavity, but a zymogen level of approximately 5% can be reversed and diffuse into the blood, which allows it to be detected in the blood. Studies have shown that the level of PG I can reflect the secretory function of gastric glands to a certain extent, and its level is positively correlated with the maximum secretion of gastric acid but negatively correlated with the degree of gastric body inflammation and atrophy[17]. An increase in the level of PG II suggests an inflammatory response in the gastric mucosa, while a decrease in the level of PG I suggests atrophy of the gastric corpus[13]. When the gastric mucosa atrophies and develops severe injury, the number of gastric glands and fundic glands will decrease or be replaced by pyloric glands, and the pyloric glands lack gastric chief cells and cervical mucous cells, which will lead to a decreases in the level of PG I and the ratio of PG I/II[18]. In our study, the result was 1.3 (4.31, 6.26) in the gastric polyp group and 0.67 (2.98, 4.26) in the gastric cancer group. The AUC was 0.628, which has certain clinical significance in the early diagnosis of gastric cancer.

Cytokines are important in the diagnosis of gastric cancer. Cytokines are small molecular proteins secreted by cells in response to various stimuli that can exert biological effects by binding to specific receptors on target cells[19]. Cytokine production and cellular immune function are important in the occurrence and development of tumors and have certain diagnostic and prognostic value in gastric diseases[20]. The occurrence and development of gastric cancer are biological processes involving multiple stages and multiple factors. A large number of studies have shown that activated inflammatory factors are involved in the occurrence and development of gastric cancer. The immune function of cells is closely related to the occurrence and development of tumors. These inflammatory factors, as multifunctional cytokines, can not only directly damage tumor cells but are also important mediators by which monocytes kill tumor cells[20,21]. Studying the relationship between cytokines and gastric cancer provides a new direction for exploring the pathological mechanism of gastric cancer and provides a theoretical basis for the clinical development of more effective diagnosis and treatment. Studies have confirmed that tumor patients typically have immune function defects, especially cellular immune dysfunction[22]. TNFα is an important mediator of the inflammatory response and a series of pathophysiological processes in vivo. The dysregulation of cytokines and their receptors is closely related to the occurrence and development of tumors[23]. TNFα is known for its ability to significantly induce hemorrhagic necrosis of tumors in mice and is a multifunctional cytokine produced by macrophages and activated T cells. The functions of TNFα mainly include inducing an acute albumin response, activating neutrophils and lymphocytes, regulating the metabolic activity of tissues, and promoting the release of other cytokines[24]. Studies have shown that TNFα can not only kill a variety of tumor cells and enhance antitumor effects but also promote the growth and metastasis of certain tumors. When the concentration is appropriate, TNFα can cause tumor tissue hypoxia and vascular damage around the tumor and promote the cytotoxic effects of NK cells and macrophages, thereby enhancing immunity and inhibiting tumor growth. When TNFα is abnormally elevated in the body, the immune system is disturbed, causing systemic cytotoxicity, and tumor cells evade immune surveillance and continue to grow[25]. TNFα can promote the production of more TNFα in thymic cancer cells cultured in vitro. Tumor cells themselves can also promote the production of TNFα by myeloid cells by secreting versican, and TNFα can promote the accumulation of myeloid cells with a vascular endothelial phenotype to the tumor site, promote the formation of blood vessels, and then promote tumor growth and transfer[26]. In our study, compared to that in the gastric polyp group, the level of TNFα was significantly increased in the gastric cancer group. As an important inflammatory regulator, TNFα may play a role in tumor-associated inflammatory processes, increasing the risk of inflammation-induced tumors.

There are still some limitations in this study. First, the detection indices were only examined in the gastric polyp and gastric cancer groups, and a healthy control group was not evaluated. Second, the stage of gastric cancer was not evaluated and should be evaluated in future studies. Third, the sample size of the gastric polyp group was relatively small, which may cause bias in this study.

In summary, we developed an index model that included CA724, P and IMA to distinguish between gastric cancer and gastric polyps. After validation, when compared to the conventional index CA724, the panel showed improvements in detecting gastric cancer and may be a potential discriminating method for use in clinical practice.

Early detection and diagnosis are crucial for the prevention and treatment of gastric cancer in clinical practice.

Blood index panels have been shown to improve the diagnostic value in many studies compared with single indices.

We aimed to develop a blood index panel that can improve the diagnostic value for discriminating gastric cancer and gastric polyps.

We have developed a potential method for differentiating gastric cancer and gastric polyps based on a blood index panel. this tool may be helpful in clinical practice.

A healthy control group and stage of gastric cancer should be evaluated in future studies, and a larger sample size should be used.