Corticosteroids and anti-tumor necrosis factor α mAbs are widely used to treat Crohn's disease (CD). However, one disadvantage of this treatment is impairment of normal immune function, leading to an increased risk of infection. Cryptococcus infection is an opportunistic infection that occurs mainly in immunocompromised patients and poses a significant diagnostic challenge in patients with CD.

Here, we report three cases of pulmonary cryptococcosis in patients with CD after receiving immunomodulatory treatment. The patients presented with no or mild respiratory symptoms. Chest computed tomography scans revealed pulmonary nodules in the unilateral or bilateral lobes. Diagnoses were made using pathological examination and metagenomic sequencing. The patients were treated with fluconazole 400 mg once daily for 1 to 6 mo, and symptoms were resolved. Literature searches were conducted in PubMed, Web of Science, and Embase to retrieve previously reported cases and summarize patient characteristics.

The incidence of cryptococcus infection has increased along with immunomodulator use. Clinical vigilance is required for early identification and standardized treatment.

Core Tip: Corticosteroids and anti-tumor necrosis factor α mAbs are commonly used to treat Crohn's disease (CD). However, they may also contribute to an increased risk of opportunistic infections. In this article, we report three cases of pulmonary cryptococcosis in patients with CD after receiving immu-nomodulatory treatment. Pathogen identification mainly depends on pathological examination findings, but metagenomics can serve as an alternative tool. Patients with timely diagnosis generally have a good prognosis, but clinical alerts should be raised in those who are elderly and have comorbidities and dissemination phenotype.

Crohn's disease (CD), a chronic inflammatory disease that may involve any part of the digestive tract, is characterized by periodic clinical relapse and remission[1]. Treatment medications include mesalamine, corticosteroids, small-molecule immunosuppressants, and biologics such as mAbs[2]. However, these drugs also affect normal immune function and may contribute to an increased risk of opportunistic infections.

Pulmonary cryptococcosis is a type of subacute or chronic fungal infection caused by the genus Cryptococcus, and is found mostly in immunocompromised patients. It usually presents with isolated pulmonary granulomatous lesions but can also disseminate to other organ systems[3]. Here, we report three cases of pulmonary cryptococcosis in patients with CD who received immunomodulatory treatment, and review previously reported cases. Literature searches were conducted in PubMed, Web of Science and Embase databases using the keywords “Crohn's disease”, “pulmonary cryptococcosis”, and “cryptococcus”. The search was restricted to full-text journal articles and conference abstracts published in English between January 1980 and May 2022. The bibliographies of the included articles were manually reviewed.

Case 1: A 65-year-old man was admitted to a local hospital for recurrent abdominal distension and pain 10 years ago.

Case 2: A 20-year-old man was admitted to our hospital for perianal pain with fever 5 years ago.

Case 3: A 59-year-old man was admitted to a local hospital for recurrent abdominal pain and diarrhea 13 years ago.

Case 1: The patient was referred to our hospital and diagnosed with CD. Before treatment initiation, chest computed tomography (CT) showed small nodules in the bilateral upper lobes with a benign tendency, pulmonary sac in the right upper lobe, and fibrous foci in the right middle lobe and bilateral lower lobes. The patient received four doses of infliximab (IFX; 300 mg) and achieved clinical remission.

Case 2: The patient was diagnosed with CD and was treated with IFX for 2 years (22 doses; 300 mg), which was discontinued due to secondary loss of response. He complained of night sweats and right-sided chest pain during deep breathing.

Case 3: The patient was diagnosed with CD 5 years ago and had been treated with methylprednisolone (MP; 0.75 mg/kg) for 3 years. He complained of productive cough for 1 mo.

Other laboratory examination results are summarized in Table 1.

Case 2: Chest CT revealed patchy lesions in the right upper lobe and right interlobar fissure, and multiple bilateral nodules with inflammatory propensity (Figure 2A). Bronchoscopy revealed clear segmental bronchi with no apparent stenosis or neoplasm in the lumen. Fibrinobronchoscopy was performed, and the BALF Aspergillus GM level was 0.840 μg/L. AF staining, fungus, brush cytology, and culture results were negative. BALF was sent for metagenomic sequencing and Cryptococcus was detected.

Case 1-3: A diagnosis of CD combined with pulmonary cryptococcosis was confirmed.

Case 1: IFX was discontinued, and the patient was administered fluconazole (FLCZ) 400 mg once daily for 6 mo.

Case 2: Medications for CD were discontinued. The patient was given FLCZ 400 mg once daily for 5 mo.

Case 3: MP was switched to pan-enteral nutrition therapy. The patient was administered FLCZ 400 mg once daily for 1 mo.

Case 1: A chest CT upon completion of anti-fungal therapy showed reduced size of the pulmonary nodule in the left upper lobe.

Case 3: IFX was initiated 7 years later because of the progression of CD. Regular follow-ups have revealed no recurrence so far.

The clinical courses of the three cases are summarized in Figure 4. 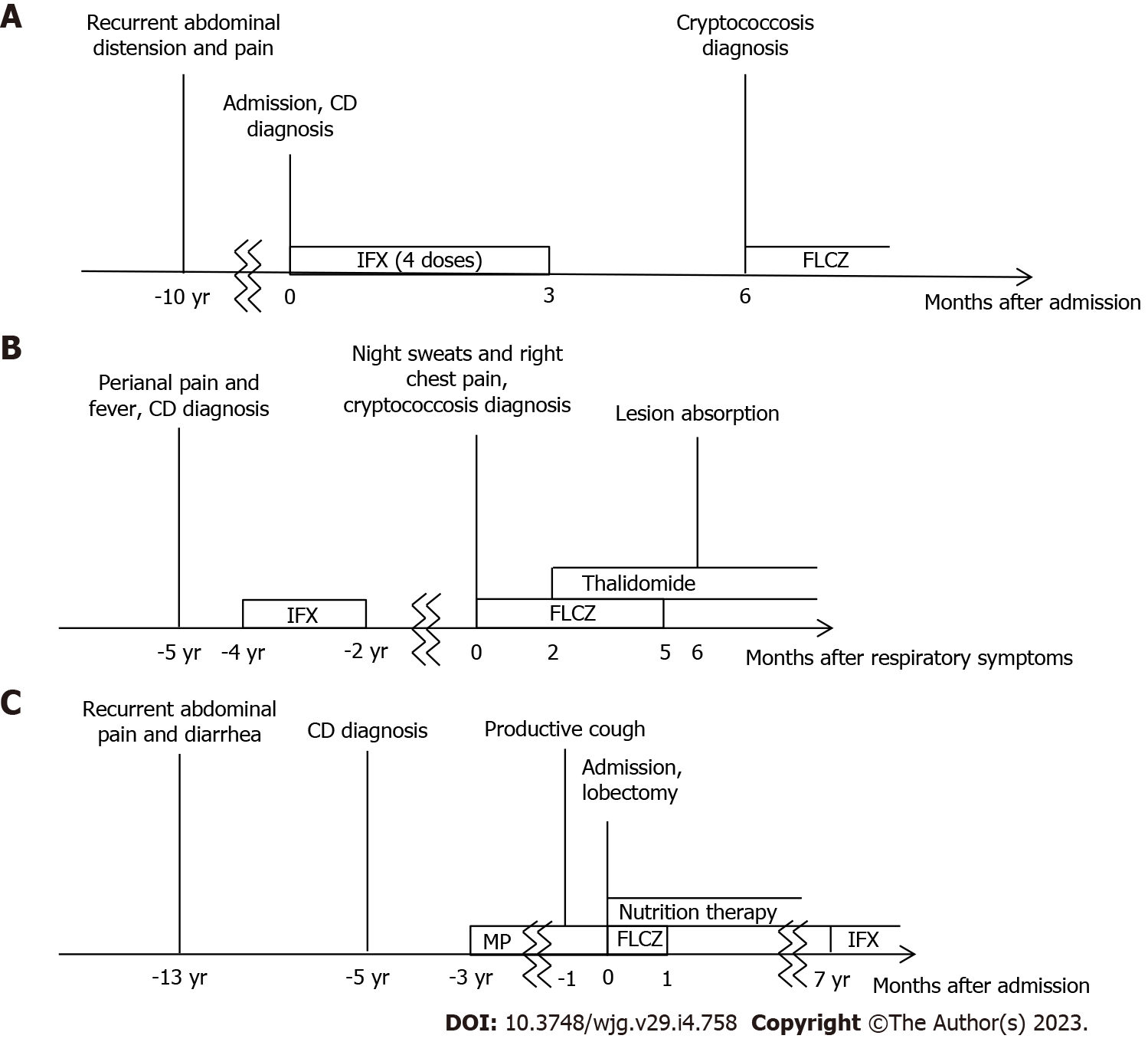 Cryptococcus infection is an opportunistic fungal infection caused by Cryptococcus neoformans or Cryptococcus gattii. These pathogens are ubiquitously distributed, with the respiratory tract being the primary portal of entry. Cryptococcosis often occurs in immunocompromised individuals, such as human immunodeficiency virus-infected patients, organ transplant recipients, and those with indications for immunosuppressants[3]. However, it has also been reported in immunocompetent patients[4].

A total of 21 studies reporting CD cases complicated by Cryptococcus infection were identified (Table 2)[4-24]. Among them, one was a retrospective analysis[21] (197 males and 69 females) and another reported relapse of a previously reported case[13]. The remaining 19 patients comprised 13 males and 6 females; 9 of the cases were disseminated cryptococcosis[4,5,8,12,15-19]. Infection sites included lungs (15 cases), central nervous system (CNS; 5 cases), gastrointestinal tract (GI; 3 cases), skin (1 case), omentum (1 case), and pleural fluid and ascites (1 case).

Infected patients had been treated with different combinations of CD drugs, including anti-tumor necrosis factor α (TNF-α) agents, such as IFX, adalimumab and certolizumab pegol, corticosteroids, and other immunosuppressants. Symptoms ranged from asymptomatic lung granulomas to severe pneumonia. Patients with disseminated cryptococcosis may also present with symptoms of other organ systems, such as colitis[8], meningitis[12], or skin ulcers[5]. Chest imaging typically revealed single or multiple pulmonary nodules. Diagnosis mainly relies on pathological examination, with accessory methods including fungal culture and the cryptococcal polysaccharide capsular antigen test. The most commonly used anti-fungal medications are amphotericin B (AmB), liposomal AmB (LAmB), 5-flucytosine (5FC), FLCZ, itraconazole, and voriconazole. Patients with mild symptoms generally recovered after treatment with triazole, while AmB and 5FC were intended for deep fungal infections; however, AmB and LAmB may cause serious adverse events[4,8]. Patients with disseminated cryptococcosis have a relatively poor prognosis, particularly when the CNS is involved.

Anti-TNF-α antibodies have been widely administered among CD patients with high efficacy, but concerns remain regarding their immunogenicity, skin toxicity, and increased risk of infection, such as the possible activation of latent TB. Therefore, current guidelines suggest that TB screening should be conducted before medication infusion[25]. TNF-α also plays a role in clearing pulmonary Cryptococcus infections by inducing interleukin-12 and interferon γ to promote a T1-cell-mediated immune response[26]. Anti-TNF-α agents, among other immunomodulators, may interfere with this process and increase the risk of Cryptococcus infection.

In this paper, we report three male patients diagnosed with CD, aged 20–65 years, who developed pulmonary cryptococcosis after being treated with anti-TNF-α agents or corticosteroids. The patients presented with asymptomatic or mild pneumonia with pulmonary nodules. One patient (case 2) showed elevated CA-125 level, which might be due to intestinal inflammation. G test and GM test were both negative, possibly because of low sensitivity of the tests for Cryptococcus. One patient (case 3) underwent surgery because of difficulty in biopsy. Diagnosis depended on postoperative pathological examinations since BALF might fail to detect Cryptococcus. All patients achieved symptom resolution after FLCZ treatment, consistent with other studies[6,10,23].

CD complicated with pulmonary cryptococcosis is relatively rare, but its incidence has increased in recent years with the use of various immunomodulators, particularly biologics, in CD management. Diagnosis is challenging because clinical symptoms and chest imaging both lack specificity, and GI manifestations can resemble CD progression, leading to misdiagnosis. Therefore, high clinical vigilance is required for early identification of infection, discontinuation of immunomodulators, and standardized treatment.

Our three case reports and literature review suggest that patients with timely diagnosis generally have a good prognosis. However, comorbidities, advanced age, and dissemination phenotype should raise clinical alerts. Metagenomic sequencing can be an alternative approach for pathogen diagnosis when biopsy is unfeasible.