Esophagogastric varices are a common complication of cirrhosis with portal hypertension and endoscopic treatment has been recognized as a primary preventive and therapeutic option for such patients; however, it should be noted that bradyarrhythmia is regarded as one of the contraindications to endoscopic examination. Meanwhile, acute variceal bleeding may result in a high mortality rate in cirrhotic patients with portal hypertension accompanied by bradyarrhythmia. At present, there is an absence of reports concerning the treatment of such group of patients who underwent transjugular intrahepatic portosystemic shunt (TIPS). The present report details the case of a cirrhotic patient with acute variceal bleeding accompanied by bradyarrhythmia who underwent TIPS under temporary pacemaker protection.

We report the case of a 64-year-old male patient who was confirmed with bradyarrhythmia by ambulatory electrocardiogram 24 h before the operation. The patient was successfully treated by TIPS under temporary pacemaker protection.

In terms of cirrhotic patients with abnormal cardiac electrophysiological conduction, TIPS may be effective in reducing the complications of portal hypertension following the exclusion of severe pulmonary hypertension and heart failure, showing moderate feasibility in clinical applications.

Core Tip: Transjugular intrahepatic portosystemic shunt (TIPS) has been applied extensively in the treatment of cirrhotic patients presenting with portal hypertension; however, treating cirrhotic patients with bradyarrhythmia presents a great challenge due to the possibility of serious cardiac complications. In our case report, a 64-year-old male patient who was confirmed with bradyarrhythmia by ambulatory electrocardiogram 24 h before the operation was successfully treated by TIPS under temporary pacemaker protection.

Transjugular intrahepatic portosystemic shunt (TIPS) has been applied extensively in the treatment of cirrhotic patients presenting with portal hypertension; however, treating cirrhotic patients with bradyarrhythmia presents a great challenge due to the possibility of serious cardiac complications. In this case report, a 64-year-old male patient who was confirmed with bradyarrhythmia by ambulatory electrocardiogram 24 h before the operation was successfully treated by TIPS under temporary pacemaker protection.

A 64-year-old male patient was admitted to the hospital because of recurrent haematemesis and melena.

The patient experienced repeated hematemesis and black stool for 6 mo. He had received conservative treatments in many hospitals but with no relief, and was then referred to our hospital.

The patient had hepatitis B liver cirrhosis and acute variceal bleeding accompanied by bradyarrhythmia.

The patient had no special personal history or family history.

The results of laboratory examinations were Child-Pugh grade A liver function and a Model for End-stage Liver Disease (MELD) score of 12.

After admission, the patient was diagnosed with hepatitis B cirrhosis, acute variceal bleeding, and bradyarrhythmia.

Initially, the patient refused the proposal of endoscopic treatment under temporary pacemaker protection because he could not accept repeated treatment after the initial therapeutic approach and the proposed method could not relieve portal hypertension. After a multidisciplinary meeting, the patient decided to undergo TIPS after pacemaker placement, with complete embolization of the collateral circulation caused by variceal bleeding during the operation. The patient’s condition was in accordance with the United States guidelines for TIPS[1]. The patient and his family members were fully informed and provided written consent prior to the operation.

The surgical process consisted of the follow steps: (1) Portal vein branch puncture under the guidance of preoperative liver enhanced CT and three-dimensional reconstruction of the hepatic and portal veins (Figure 1A–C; as described previously[2]); (2) temporary pacemaker implantation via the femoral vein: The guidewire was sent through the puncture needle after a successful puncture of the femoral vein. X-ray fluoroscopy and venography confirmed that the guidewire entered the inferior vena cava, followed by the insertion of a peelable sheath along the guidewire. After withdrawing the guidewire, the pacing electrode was delivered to the right ventricle under X-ray fluoroscopy. A temporary pacemaker was connected and the pacing parameters were measured. The perception and pacing function of the temporary pacemaker were good and the pacing rate was set at 70 beats/min (Figure 1D); and (3) performance of TIPS: After a successful right jugular vein puncture, the puncture system was delivered through the superior vena cava and the right atrium to the right hepatic vein or the hepatic inferior vena cava. After puncture safety evaluation, the puncture was performed successfully at one time, with the portal venous pressure measured subsequently, and the collateral circulation vessels causing esophagogastric varices were embolized simultaneously. An 8 mm Viatorr stent was inserted after dilation of the puncture channel with an 8 mm-diameter balloon. Portal vein angiography was repeated and portal venous pressure was measured simultaneously (Figure 1E–J; as described previously[2,3]). 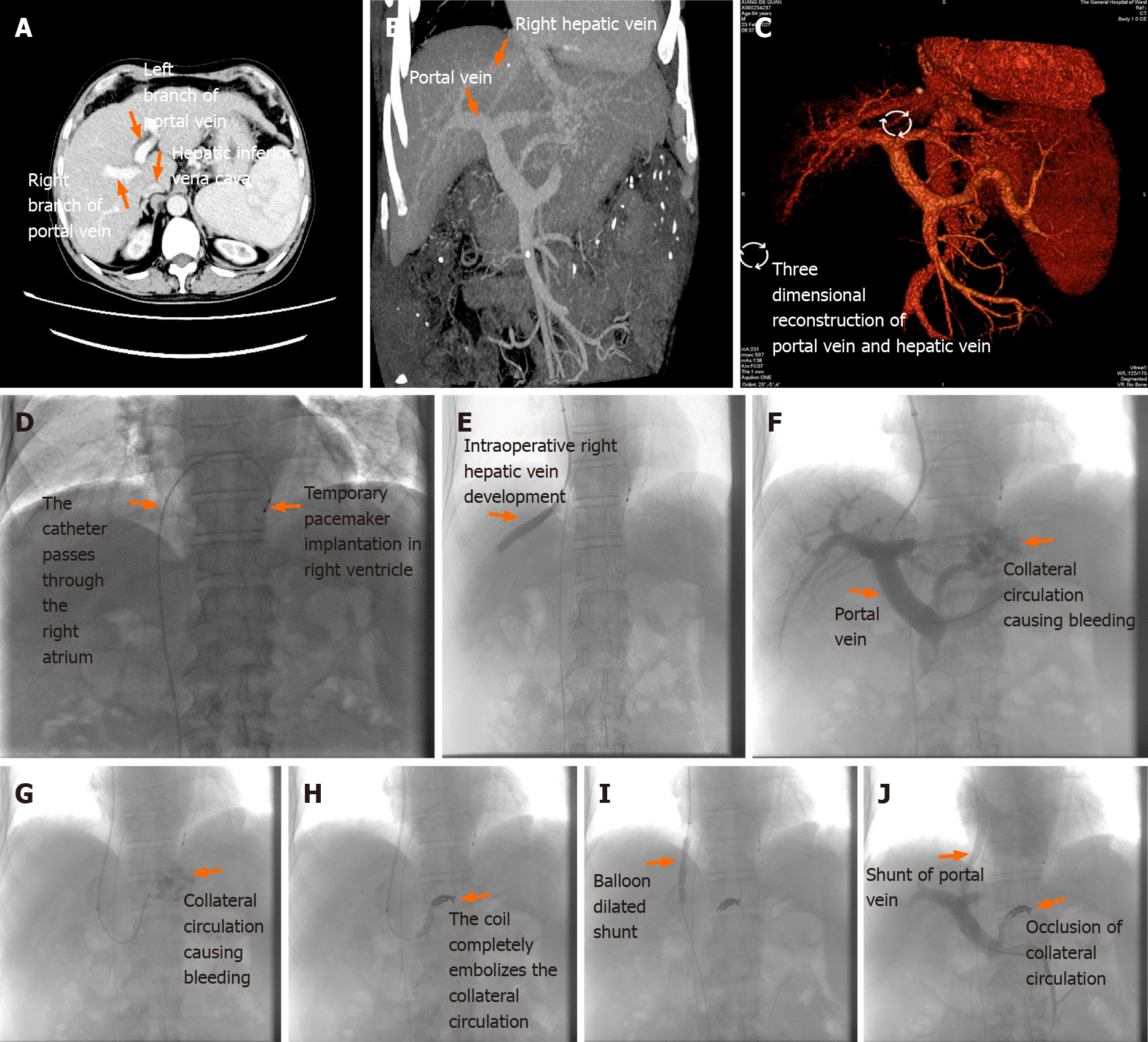 The portal pressure gradient (mmHg) of the patient decreased from 24.71 preoperatively to 10.95 postoperatively. Furthermore, his Child-Pugh score was grade A and the MELD score was 12 one week after surgery; the shape and function of the heart were normal. The patient was discharged without any complications after a stable postoperative observation period in the hospital. The patient will be followed every 3 mo.

According to the 2019 Chinese guideline for TIPS operation[4], for patients with acute oesophageal variceal bleeding, early TIPS should be considered in the presence of high-risk factors for treatment failure after initial drug therapy combined with endoscopic treatment and in the absence of contraindications. In this case report, the patient had a medical history of multiple oesophageal variceal bleeding, making him a viable candidate for TIPS. Simultaneously, the patient was detected with bradyarrhythmia, which made endoscopic therapy a high-risk procedure. On the premise of respecting the patient’s will, addressing the problem of variceal bleeding with portal hypertension by “shunt” and “devascularization” through the efficient interventional procedure in one operation was considered the best course of action. The patient agreed to the procedure.

The key points of the operation are as follows. First, a temporary pacemaker can be delivered through the right femoral vein or the left and right subclavian veins, passing through the inferior vena cava or superior vena cava to the right of the ventricular apex. Considering the risk of contact between the TIPS puncture system and the temporary pacemaker electrode, which can cause electrode displacement and the pacemaker electrode to fall off during the procedure, our team opted for temporary pacemaker placement through the right femoral vein, combined with TIPS. Second, the Glisson system consists of the concomitant intrahepatic bile duct, intrahepatic hepatic artery, and portal vein branches. It is inevitable that an inadvertent puncture will happen during the operation, which can usually be addressed by withdrawing the puncture system and repeating the procedure again, without serious consequences; however, the patient presented with complications related to bradyarrhythmia. In the case of repeated intraoperative punctures, inadvertent puncture of the bile duct may occur, which might lead to chole-heart syndrome and induce angina pectoris, arrhythmia, and other serious complications under the condition of the original abnormal cardiac electrophysiology. With respect to the above, the key to avoiding them is to improve the success rate of the intraoperative puncture. In our center, intraoperative portal vein branch puncture was performed under the guidance of preoperative liver enhanced CT and three-dimensional reconstruction of the hepatic vein and portal vein[2,3]. This can result in a relatively high success rate of puncture and reduce the frequency of indirect portal vein angiography of femoral artery puncture through the superior mesenteric artery. Besides, it is time-saving since it can be finished after one or two punctures if performed by an experienced operator, thus avoiding additional trauma and reducing the intake of radiation and contrast medium. In our case, we performed one successful portal vein puncture in the patient without any intraoperative contact between the TIPS puncture system and the temporary pacemaker electrode, or even displacement and/or electrode falling-off due to winding. Our study supports the clinical value of the aforementioned operational procedure.

So far, there are no domestic or foreign reports on TIPS under temporary pacemaker protection for cirrhotic patients with bradyarrhythmia, and studies on the effect of TIPS on the myocardium of patients are scarce. For example, in one prior study enrolling 55 patients who underwent TIPS[5], the results showed that the serum glycogen phosphorylase isoenzyme level 24 h after operation was higher than that before the operation, with no significant changes in the levels of high-sensitive troponin T (hsTnT), creatine kinase-MB isoenzyme, myoglobin, and heart-type fatty acid-binding protein. Moreover, Busk et al[6] reported that copeptin decreased by 18% and atrial natriuretic peptide increased by 52% in 25 patients who underwent TIPS one week after surgery compared to those who did it preoperatively, returning to the baseline values 4 mo later. Besides, the left ventricular internal diameter increased by 9% in those who underwent the procedure after the operation, as opposed to 16% in those who did it before (P < 0.001), without any change in the thickness of the septum and the posterior wall, suggesting an increased postoperative preload and aggravation of hyperdynamic circulation. Furthermore, Kovács et al[7] observed left and right atrial enlargement 24 h after TIPS (P < 0.05), with full recovery 3 to 6 mo later. All cardiac sizes returned to baseline levels, with the exception of the left ventricular mass, which increased by 8% (P < 0.05). Our therapeutic team emphasised the postoperative cardiac function and morphology of the patient. In this case, TIPS had no effect on cardiac morphology and function in the early stage after the operation. In our opinion, most patients can tolerate the use of an 8 mm-diameter Viatorr stent to construct the shunt, owing to limited “shunting”, despite the increased hyperdynamic circulation that may worsen cardiac dysfunction.

As evidenced by the pre-study[11] at our centre, the use of the Viatorr stent with an internal diameter of 8 mm had no significant effect on postoperative hepatic functional reserve. Moreover, changes in mid- to long-term hepatic functional reserve might be associated with the aetiology and treatment of portal hypertension in patients with cirrhosis. The incidence of hepatic encephalopathy can be significantly reduced by controlling the internal diameter of the stent. Furthermore, it is more effective to establish a shunt with the Viatorr stent, whose bare stent area in the portal vein can guarantee the smooth flow of portal blood and prevent the entry of more unmetabolised blood from the liver directly into the body circulation. Postoperative clinical laboratory tests revealed that the patient's liver function reserve was not affected, while short-term clinical observation did not reveal the appearance of hepatic encephalopathy, which further confirmed the results of our centre's previous clinical studies.

For this particular patient, active anti-hepatitis B virus treatment was still adopted, due to its beneficial effects during the long-term treatment, since the long-term survival of hepatitis B cirrhotic patients after TIPS is a complicated process that may be determined by various non-hemodynamic factors. Age, degree of renal failure, chronic inflammation, urease-producing intestinal bacteria, bacterial translocation, malnutrition, and atrophy are additional factors that are quite important when assessing treatment outcomes. We will continue to focus on the clinical outcome of this patient in further studies.

In terms of cirrhotic patients with abnormal cardiac electrophysiological conduction, TIPS may be effective in reducing the complications of portal hypertension following the exclusion of severe pulmonary hypertension and heart failure, showing moderate feasibility in clinical applications.