Serologic cross-reactivity between hantaviruses often complicates the interpretation of the results.

To analyze the diagnostic value of indirect immunofluorescence assay (IFA) and western blot (WB) in the diagnosis of hantavirus infections.

The presented results indicate that WB is more specific than IFA in the diagnosis of hantavirus infections, confirming serotype in most IFA cross-reactive samples.

Core Tip: Serologic cross-reactivity among hantaviruses often complicates the interpretation of the results. The overall cross-reactivity is generally higher for immunoglobulin G antibodies than for immunoglobulin M antibodies. Western blot seems to be a more specific serology method than indirect immunofluorescence assay in the diagnosis of hantavirus infections, confirming serotype in the majority of cross-reactive samples detected by indirect immunofluorescence assay.

Hantaviruses represent a group of serologically related rodent-borne RNA viruses that belong to the genus Orthohantavirus of the family Hantaviridae. Two different diseases, hemorrhagic fever with renal syndrome (HFRS) and hantavirus pulmonary syndrome (HPS), are caused by hantaviruses in humans[1]. Orthohantaviruses Hantaan (HTNV), Dobrava (DOBV), Puumala (PUUV), Seoul (SEOV), and Saaremaa (SAAV) cause HFRS with varying degrees of severity. While HTNV and DOBV cause a severe form of HFRS in Asia and Europe, SEOV causes less severe disease worldwide[2,3]. SAAV is also found to be responsible for a relatively mild human disease in Europe[4]. PUUV is a causative agent of nephropathia epidemica, the mildest form of the disease, endemic in Western Europe and Scandinavia[2].

Vero E6 cell culture has been used to isolate hantaviruses causing HFRS and HPS. Hantaviruses usually are not cytopathic in cultured cells; therefore, the detection of infection is confirmed using an immunofluorescence antibody test for viral antigen. Virus isolation is not performed as part of routine hantavirus diagnostics, since it is laborious and time-consuming and requires biosafety level 3 and 4 laboratories[6].

Serology is the main method for the diagnosis due to the hazardous nature of hantaviruses and a short-term viremia in infected humans[7,8]. Enzyme-linked immunosorbent assay and indirect immunofluorescence assay (IFA) are broadly used serologic tests used for detection of hantavirus immunoglobulin M (IgM) and immunoglobulin G (IgG) antibodies[9]. Immunoblot tests [western blot (WB) and line immunoassay] are also used in some laboratories[10].

Hantavirus nucleocapsid (N) protein is the major antigen in early humoral response in patients with hantavirus infection[11,12]. N protein is highly cross-reactive between different hantaviruses due to its conserved nature[11,13]. Overall, serologic cross-reactivity within the genus Orthohantavirus is the highest among viruses associated with (phylo)genetically closely related rodent species. DOBV is genetically and anti-genetically related to other orthohantaviruses transmitted by Murinae rodents (Old World mice and rats) such as HTNV, SEOV, and SAAV. PUUV is more distantly related to this group since its reservoirs belong to the Arvicollinae rodents (voles and lemmings)[14-16]. The interpretation of serology results is often complicated by the cross-reactivity, especially in areas where different hantaviruses co-circulate. Virus neutralization test is still the gold standard serologic test. Since this test has to be performed in biosafety level 3 laboratory, it is confined mainly to the reference laboratories[17].

Molecular diagnostic methods, including classic and real-time RT-PCR, are also widely used for the diagnosis of hantaviruses. Hantavirus RNA is detectable in blood early after the onset of symptoms; therefore, RT-PCR is a sensitive method for detecting hantavirus infections before the appearance of IgM antibodies. Primers specific for the hantavirus S and M segments have been used in different studies. The advantage of the molecular methods is that the RT-PCR product may be sequenced to identify the virus and perform phylogenetic analysis[5,18].

In Croatia, PUUV and DOBV have been demonstrated in humans[19-23], while SAAV and Tula orthohantavirus were also documented in rodents[24,25]. This study aimed to analyze the diagnostic value of IFA and WB methods in the diagnosis of hantavirus infections.

A total of 188 serum samples from patients with serologically confirmed acute hantavirus infection (2015-2019) tested at the National Reference Laboratory for Arboviruses and Hantaviruses, Croatian Institute of Public Health were included in the study. Serologic tests were performed using a commercial IFA (Hantavirus mosaic; Euroimmun, Lübeck, Germany) to detect IgM/IgG antibodies of the most common hantaviruses: PUUV, DOBV, HTNV, SEOV, and SAAV. A fluorescence occurring as fine droplets in the cytoplasm of infected cells in a dilution 1:100 was considered a positive result.

The study was approved by the Ethics Committee of the Croatian Institute of Public Health (Decision number: 030-02/17-10/1). Informed consent was obtained from all subjects included in the study. 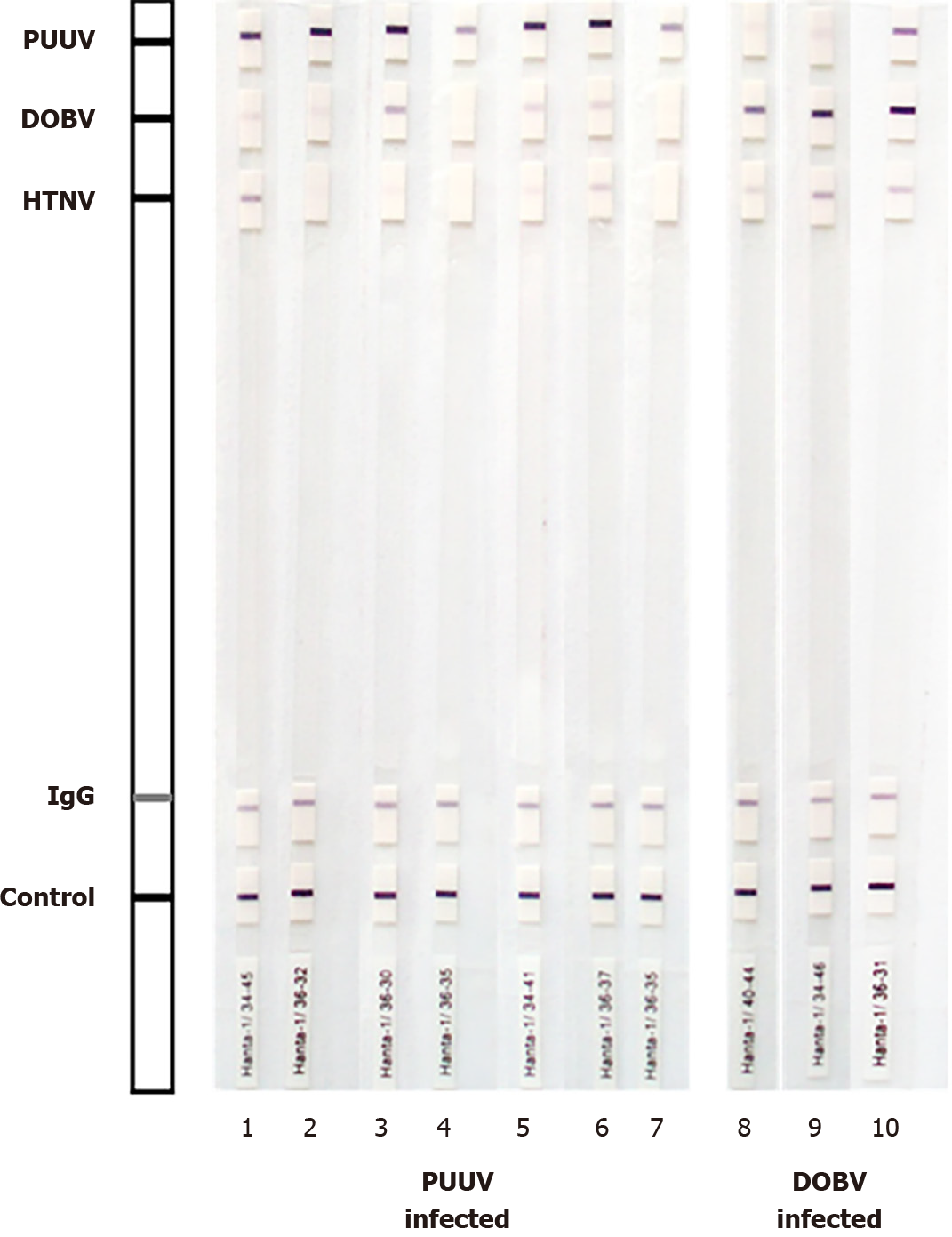 Figure 3 Western blot analysis of Puumala and Dobrava- infected patients. The test strips were coated with the affinity purified nucleocapsid Puumala (PUUV); Dobrava (DOBV) and Hantaan (HTNV) antigen. A correctly performed test for immunoglobulin (Ig)G antibodies against hantavirus antigens is indicated by a positive reaction of the control band and the IgG band. Some samples (strips 1, 3, 5, 6, 8-10) cross-reacted with other hantaviruses, however, based on signal intensity, a very strong band to the homologous virus antigen was detected compared to a very weak/weak band of the related hantavirus antigens.
DISCUSSION

IgM/IgG antibodies of PUUV-infected Croatian patients reacted moderately with HTNV (12.3%/31.5%). In a study by Lederer et al[26], even higher cross-reactivity between PUUV and HTNV IgM/IgG was found (49%/79%), while the reactivity to other tested hantaviruses was low, similar to our results.

In this study, a lower degree of cross-reactivity was also found by WB (24.5%). However, in all but 8 samples, differentiation of hantavirus serotype was possible based on powerful signal intensity to homologous antigen compared to weak/medium signal intensity to heterologous antigens. Some other studies which used WB for result confirmation showed similar results[27,28].

Since the clinical course and prognosis differ in PUUV and DOBV infection, the determination of hantavirus serotype is important for diagnosing acute HFRS cases. In addition, due to specific rodent hosts, identification of currently circulating hantavirus serotype is also useful for planning rodent control programs. Using IFA, serotype identification in seroepidemiological studies is often difficult because of extensive cross-reactivity among IgG antibodies. In DOBV infected individuals, considerable cross-reactivity was also observed between IgM antibodies. Using WB, differentiation of hantavirus serotype was possible in most cases by comparing the signal intensity in most IFA cross-reactive samples.

Although cross-reactivity among hantaviruses was detected in both IFA and WB, the results of this study showed that WB seems to be more specific than IFA, confirming hantavirus serotype in 89.5% of cross-reactive samples detected by IFA.

The cross-reactivity among hantaviruses often complicates the interpretation of serology results, especially in areas where different hantaviruses co-circulate.

Data on the comparison of different serologic methods in the diagnosis of hantaviruses are scarce.

WB seems to be more specific than IFA, confirming hantavirus serotype in the majority of cross-reactive samples detected by IFA.

Further studies on a large sample caused by different hantavirus serotypes are needed.