Article-Type of This Article
Observational Study

Germinal matrix intraventricular hemorrhage (IVH) may contribute to significant morbidity and mortality in premature infants. Timely identification and grading of IVH affect decision-making and clinical outcomes. There is possibility of misinterpretation of the ultrasound appearances, and the interobserver variability has not been investigated between radiology resident and board-certified radiologist.

From June 2018 to June 2020, neonatal cranial ultrasound examinations were performed in neonatal intensive care unit. Ultrasound findings were recorded by the residents performing the ultrasound and the pediatric attending radiologists.

There is strong agreement between radiology residents and pediatric radiologists, which is higher for high grade IVHs.

Core Tip: While possibility of interobserver variability exists in all imaging modalities, it is the highest in ultrasound. Interobserver variability in ultrasound may result from technical errors such as inadequate gain/depth settings, incomplete anatomic interrogation, or error in misinterpretation. During ultrasound examination, both the image acquisition and interpretive skills improve with increasing experience. Differences in identification and grading of intraventricular hemorrhage may affect the clinical outcome, and the subsequent management options.

Intraventricular hemorrhage (IVH) is a major neurological complication of prematurity. In neonates weighing less than 1500 g, the incidence of IVH reaches up to 27% whereas, in extremely preterm infants weighing 500-750 g, the prevalence is about 45%[1]. A substantial subgroup of premature infants with moderate to severe IVH develops neurologic sequelae including an elevated risk of post-hemorrhagic hydrocephalus, cerebral palsy, and mental retardation, while infants with mild IVH are at risk of developmental disabilities[2-4]. IVH and its neurologic and psychiatric sequelae are a major public health concern worldwide[5].

The multifaceted etiology of IVH is primarily attributed to the intrinsic fragility of the germinal matrix vasculature and the disturbance in the cerebral blood flow. The germinal matrix exhibits rapid angiogenesis in contrast to other brain regions causing its high vascular density. Hemorrhages occurring in the germinal matrix often rupture through the ependyma into the lateral ventricle and are then referred to as IVH[6].

While the possibility of interobserver variability exists in all imaging modalities, it is the highest in ultrasound. Interobserver variability in ultrasound may result from technical errors such as inadequate gain/depth settings, incomplete anatomic interrogation, or misinterpretation errors[10]. During ultrasound examination, both the image acquisition and interpretive skills improve with increasing experience.

Few studies have examined the reliability of cranial ultrasound interpretation, despite the ostensibly important role of accurate interpretation. Variations in the identification and grading of IVH may affect the morbidity, clinical outcomes, and subsequent treatment options. This study aims to assess interobserver reliability between senior residents performing bedside cranial ultrasounds during on-call hours and board-certified pediatric radiologists.

This cross-sectional study was carried out in the Department of Radiology at Aga Khan University Hospital, Karachi, Pakistan. The Institutional Ethical Review Committee approved the study with a waiver for informed consent. The study period was two years, from June 2016 to June 2018. All premature infants (less than 37 wk of gestational age) or infants with very low birth weight (birth weight equal to or less than 1500 g) and infants in the Neonatal Intensive Care Unit who underwent a cranial ultrasound were included in the study. Patients who were born at term, and had prior brain computed tomography (CT) or brain magnetic resonance imaging (MRI) , or patients with known cerebral malformations were excluded. To prevent potential selection bias, patients with prior neuroimaging were excluded.

The gestational age of all infants was determined from a chart review of the mother. The weight of all infants included in the study was measured with a digital weighing scale.

Cranial ultrasound in all cases was performed through the anterior fontanelle in both coronal and sagittal planes using the Mindray M7 Diagnostic Ultrasound System with a 5- to 10-MHz transducer. All ultrasound examinations were performed by a senior resident (Year III and year IV) and reviewed by an attending board-certified radiologist with at least five years’ experience in pediatric imaging. The findings of both the resident and the pediatric radiologist with regards to the presence and absence of intraventricular hemorrhage and its grading were recorded on a structured proforma by a year III resident, blinded to additional clinical information. In addition to IVH, all scans were recorded for the presence or absence of hydrocephalus, periventricular leukomalacia, and brain malformations. If hydrocephalus was noted to be present, it was graded as mild, moderate, or severe based on the measurement of transverse atrial width. 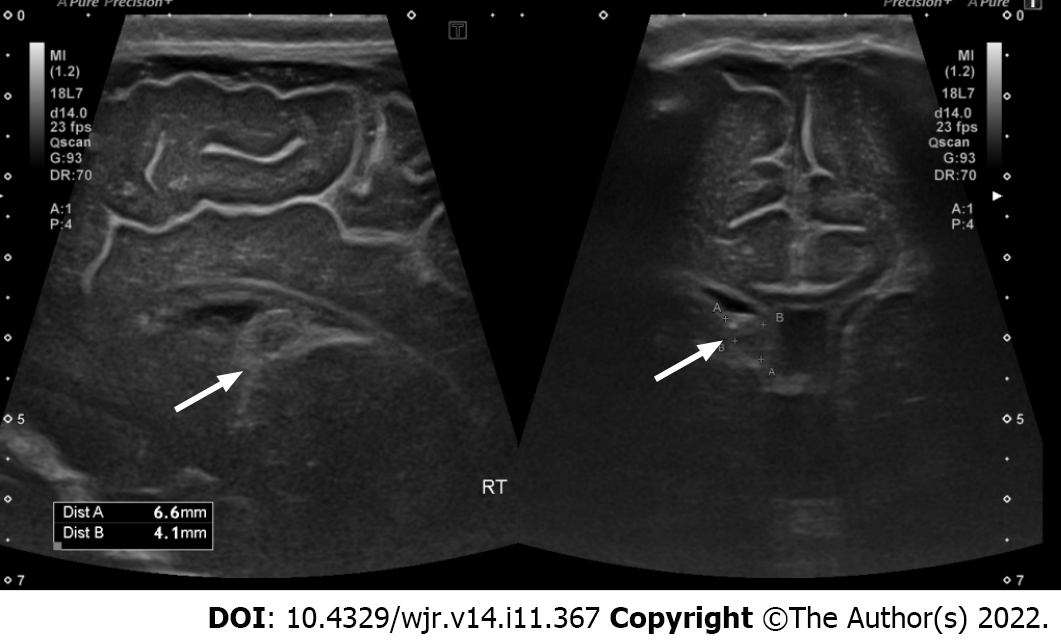 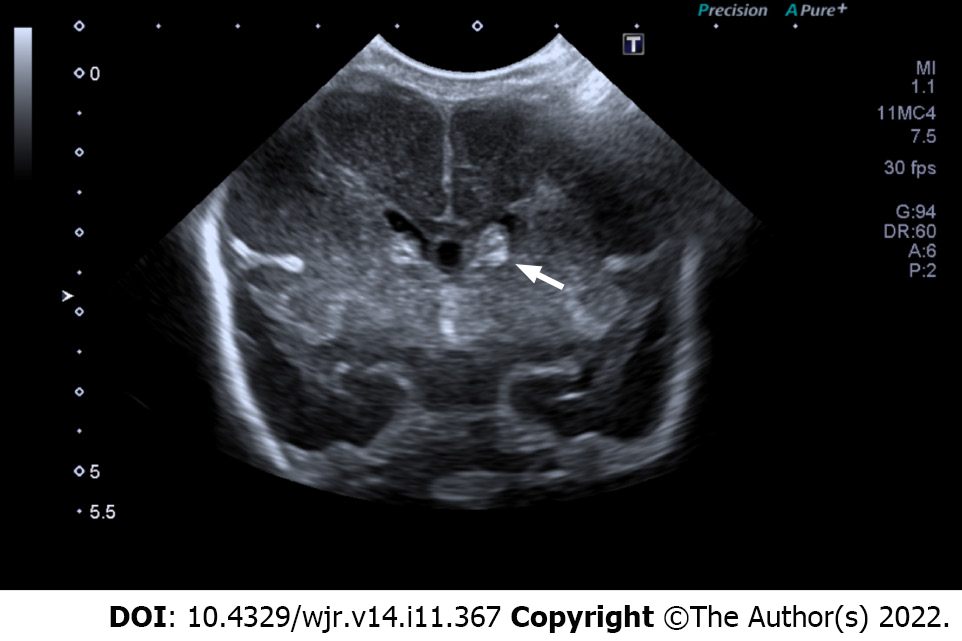 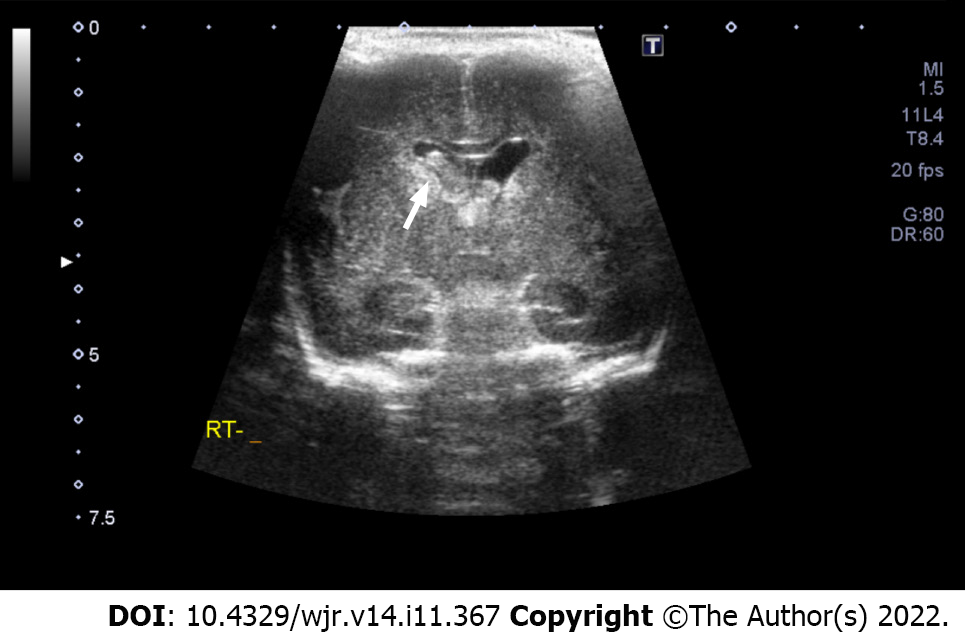 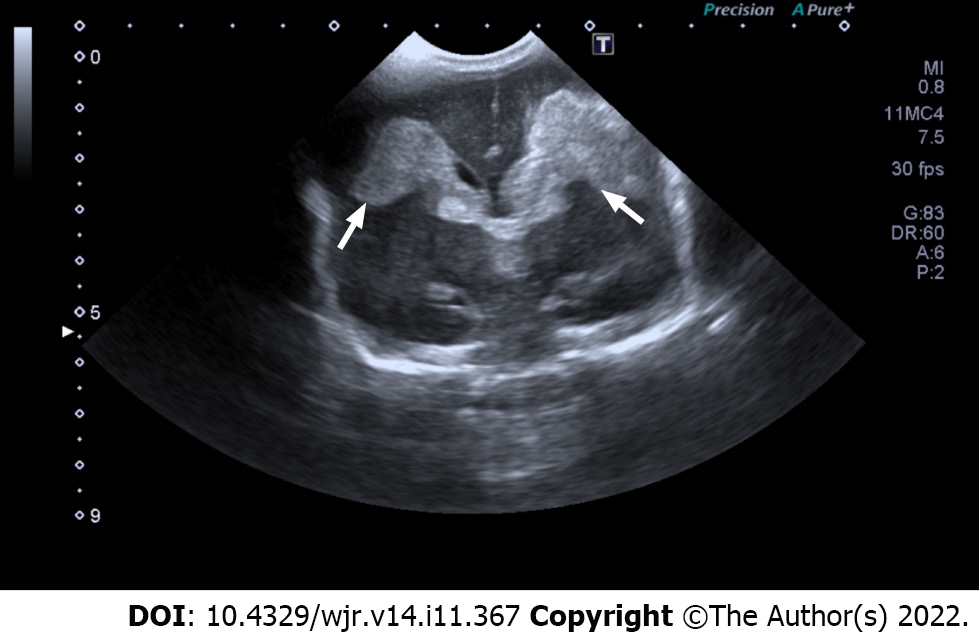 On making the diagnosis of rheumatic fever by auscultation, Alvan Feinstein wrote in his book Clinical Judgment “The main problems of observer variability were neither in the eyes nor the ears of the observers. We all saw and heard essentially the same things, but each observer used different ingredients in his criteria for description and interpretation of the observations”[12]. The same can be said about medical imaging in which interobserver variability remains a critical issue[13].

Bedside cranial ultrasound is the neuroimaging standard of care for the detection of IVH[14]. Cranial sonography is cost-effective, does not require sedation, and is portable, allowing for the evaluation of critical patients at the bedside. In a study by Maalouf et al[15], ultrasound has a predictive probability of 0.85 (0.76-0.94) for the presence of IVH on MRI.

The interobserver agreement for findings on neonatal head ultrasound varies from poor to excellent among radiologists[16]. Although there is a possibility of intra-observer agreement, this is quite low. While numerous studies have explored interobserver variability in neonatal cranial ultrasonography, ours is the first to study the differences in interpretation between senior residents and board-certified pediatric radiologists.

Even though we did not find any prior studies on interobserver variability between senior residents and radiologists, our results are comparable to previous studies in that there is excellent agreement on major abnormalities such as grade III and IVH.

The board-certified radiologist's experience is most likely to be responsible for the study's relatively low interobserver agreements for grade I and II IVH. Because of greater image gain/depth, improved probe handling, and knowledge of pertinent anatomy, experience with doing cranial ultrasonography can result in better imaging quality.

This experience also manifests itself in improved ultrasound interpretation performed by others. Due to inexperience, the resident in our study initially missed the additional findings of hydrocephalus, choroid plexus abnormalities, and periventricular echogenicity as indicated in Table 2. We plan to conduct a follow-up study to investigate abnormalities other than IVH on neonatal cranial ultrasound which can have significant impact on disease prognosis.

This study has some limitations. The residents and pediatric radiologists were compared for interobserver agreement only on one variable, i.e., IVH, but no cross-sectional neuroimaging such as CT or MRI was performed for confirmation. The interobserver agreement was not calculated for additional findings such as parenchymal hemorrhage, hydrocephalus, and venous infarctions, which also have implications for neonatal neurodevelopment.

Despite the ostensibly important role of accurate cranial ultrasound interpretation, few studies have investigated the reliability of interpretation of cranial ultrasound. Differences in the identification and grading of intraventricular hemorrhage (IVH) may affect the clinical outcome and the subsequent management options. This is the reason the study was undertaken.

A total of 200 neonatal cranial ultrasound examinations were evaluated in NICU patients. Ultrasound findings were recorded for both the resident performing the ultrasound and the pediatric attending radiologist. Interobserver agreement was calculated.

Our study results are limited by the cross sectional nature of the study. Additionally, we did not compare agreement on the interpretation of periventricular leukomalacia, incidental findings, and degree of ventriculomegaly if it was present which can have significant impact on disease prognosis. This may be explored in a future study.