Transarterial chemoembolization (TACE) is an effective treatment for primary hepatocellular carcinoma (PHC). Radioactive iodine therapy has been used in the treatment of advanced PHC, especially in patients with portal vein tumor thrombosis. However, data on the therapeutic effect of TACE combined with radioactive iodine therapy in PHC are scarce.

For this study, 98 advanced PHC patients were recruited and divided randomly into the study and control groups. Patients in the study group were treated with TACE combined radioactive iodine implantation therapy. Patients in the control group were treated with only TACE. The tumor lesion length, clinical effect, serum alpha-fetoprotein (AFP) and CT perfusion parameters were compared before and after therapy, and statistical analysis was performed.

TACE combined with radioactive iodine implantation in the treatment of advanced PHC can inhibit the formation of blood vessels in tumor tissue and reduce the perfusion level of tumor lesions, thereby improving the clinical efficacy and prolonging the survival time of patients.

Core Tip: This randomized controlled trial was designed to investigate the short-term clinical efficacy of transarterial chemoembolization (TACE) combined with radioactive iodine implantation in the treatment of patients with primary hepatocellular carcinoma (PHC). The results demonstrated that this treatment could inhibit the formation of blood vessels in tumor tissue and reduce the perfusion level of tumor lesions better than TACE alone. Therefore, TACE combined with radioactive ion implantation could improve the clinical efficacy and prolong the survival time of patients with PHC.

Transarterial chemoembolization (TACE) is the main treatment for patients with inoperable hepatocellular carcinoma. It can release chemotherapeutic drugs rapidly and maintain a high blood concentration in the organ to inhibit rapid local tumor growth. However, its long-term efficacy is inadequate[5-8]. Radioactive iodine (125I) implantation is a new means of radiotherapy with a high radiation dose and precise localization. It is also a potential treatment option for patients with PHC[8-11]. As such, this study investigated the short-term clinical efficacy of TACE combined with 125I implantation in the treatment of patients with PHC.

From January 2016 to June 2018, 98 patients with PHC, who were scheduled for treatment with interventional embolization chemotherapy, were selected as study subjects. They were randomly divided into the study group (n = 49) and the control group (n = 49). The inclusion criteria included: (1) Diagnosis of PHC according to the criteria in the Guidelines for Diagnosis and Treatment of Primary Hepatocellular Carcinoma[10,12-15]; (2) PHC confirmed by computed tomography (CT), magnetic resonance imaging and liver puncture biopsy; (3) Patients aged 19-79 years; (3) PHC patients with preoperative liver function grade A or B according to the Child-Pugh classification; (4) Stage C and D lesions according to the Barcelona Clinic Liver Cancer (BCLC) staging system[10,12-15]; (5) Preoperative assessment of survival time > 3 mo; and (6) PHC patients with survival status score 0-2 based on the Eastern Cooperative Oncology Group Performance Status[13]. The exclusion criteria included: (1) Metastatic hepatocellular carcinoma; (2) Biliary obstruction due to tumor infiltration of the bile duct; (3) Hepatic artery-portal vein fistula formation; (4) Mental illness and intellectual disability; (5) Severe renal dysfunction; and (6) Other contraindications to treatment. Study protocols were reviewed by ethics experts and implemented with presurgical informed consent from patients and families.

Treatment method: The control group was treated with TACE, which included the following chemotherapy drugs: 0.75-1.25 g of 5-fluorouracil; 80-120 mg of cisplatin; 20 mg of oxaliplatin; 80-140 mg of epirubicin; and super-liquidated iodine oil as an embolic agent. The doses of chemotherapy drugs and iodine oil were adjusted according to the tumor size and blood supply.

The study group was treated with TACE combined with 125I implantation. After 1 wk of TACE, a CT scan was performed to confirm the location, structure and specific size of the tumor and its surrounding tissues, and CT navigation and localization were performed. 125I particles were placed in the patients after CT determined that the needle tip reached the target area, and the distribution was recorded. The puncture needle was withdrawn after successful placement was confirmed by CT scan, and the site was sterilized and bandaged.

Lesions were classified as complete remission (CR), partial remission (PR), stable disease and progressive disease according to the changes in the lesions before and after treatment. CR was defined as solid tumors, other than nodal disease, where the target lesion completely disappeared or all target nodes had shrunk to normal size for 4 wk or more. PR was defined as the sum of long diameters selected for target lesions and short diameters selected for target nodes reduced by ≥ 30% when compared to baseline for 4 wk or more. Progressive disease was defined by the sum of the target lesion diameters exceeding the reference value (smallest sum of the measured target lesion diameters) by 20% or more and the absolute value increased by ≥ 5 mm or ≥ 1 new lesions having appeared and not completely/partially in remission before the lesions grew in size or increased in number. Stable disease was defined when the volume and number of lesions were between PR and progressive disease.

SPSS 21.0 software (IBM Corp., Armonk, NY, United States) was used for statistical comparative analysis of the data. The measurement data, such as tumor length and AFP level, were expressed by mean ± SD, and the t test was adopted for comparison between groups. χ2 test was adopted for comparative analysis between groups (clinical efficacy and other count data). The Kaplan-Meier method was used to model the survival analysis. P < 0.05 was considered a statistically significant difference.

RESULTS
Comparison of baseline characteristics between the two groups

Comparison of changes of tumor lengths between the two groups

Comparison of treatment efficacy in the two groups of patients

Comparative analysis of survival between the two groups of patients 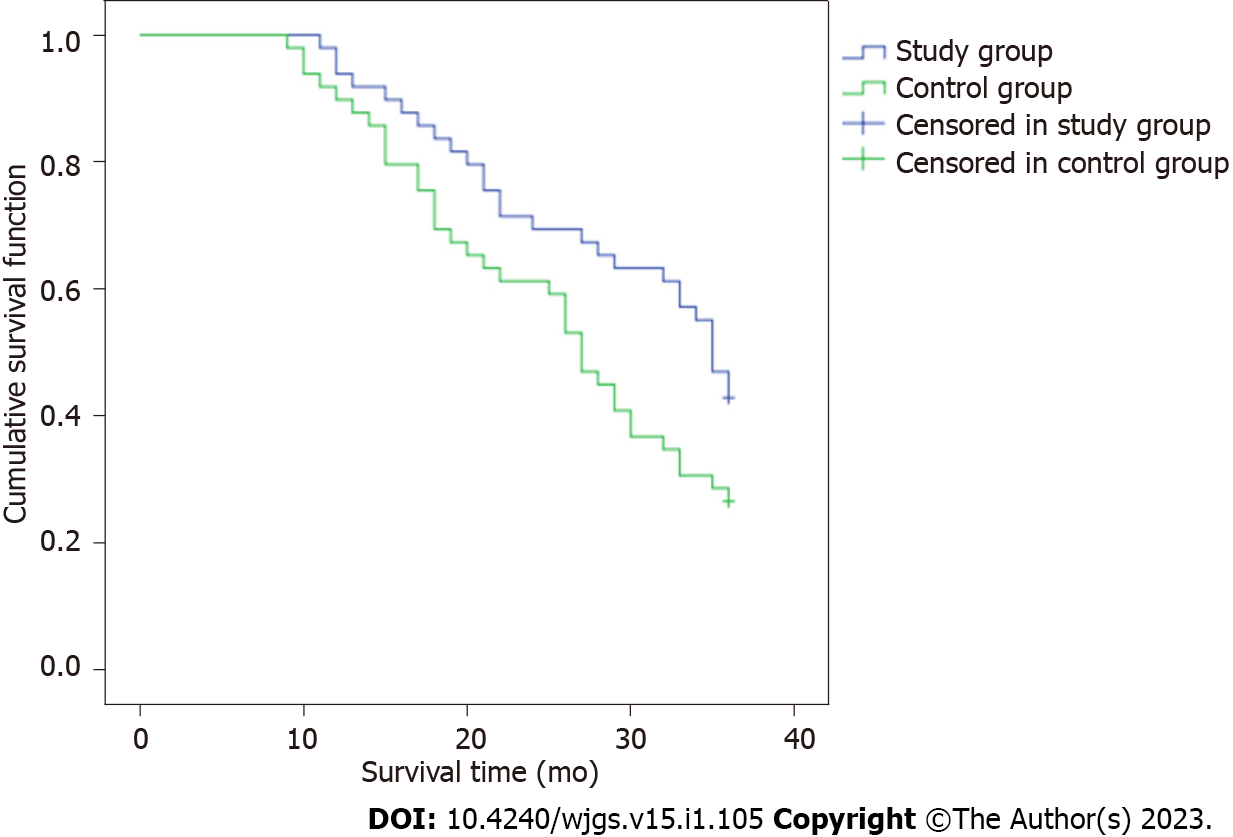 Epidemiological studies suggest that the incidence rate of liver cancer in China has reached 29/100000, with a mortality rate of 26.04/100000[3,10,12,16]. PHC is caused by various factors including hepatitis B virus infection, aflatoxin, toxic substances, alcohol, nitrite, environmental pollution, etc[7,11,15,17]. Surgery is the most effective treatment for PHC. However, due to insidious early symptoms, the time for surgical treatment is often missed[10,17-19].

TACE is the first choice of treatment for inoperable liver cancer surgery[7,20,21]. It directly delivers embolic agents, iodinated oil and chemotherapeutic drugs, which can cause tumor ischemia and hypoxia, and are injected into the hepatic artery through a catheter. This catheter also blocks the blood supply, which inhibits tumor growth and metastasis[1,7,11,18,21]. Unfortunately, as the clinical utilization of TACE increased, several disadvantages were found, including need for multiple treatments, incomplete embolizations, and increased chance of recurrence and metastasis due to vascular endothelial growth factor release. A single TACE treatment typically has a dissatisfactory long-term treatment effect.

125I implantation is a new minimally invasive interventional technique that is effective in treating lung cancer, liver cancer, and kidney cancer[8-11]. Radioactive particles, like 125I, are encased in a very small silver rod or titanium alloy and form a very small particle that contains a very strong radioactive isotope[8,9,11]. 125I particles are a type of brachytherapy. Due to the shorter range (1 cm action radius), lower capacity and weak penetration ability of brachytherapy, there is less impact on normal cells while still effectively killing tumor cells. After the radioactive particles are implanted inside the tumor, rays are continuously emitted to kill tumor cells for a certain period of time.

AFP is a broad-spectrum tumor marker with high sensitivity and specificity in monitoring disease changes and diagnosing PHC[1,2,10,22]. This study found that the serum AFP in the study group was lower than that in the control group after 1 mo and 3 mo of treatment, indicating that TACE combined with 125I implantation can reduce the level of AFP. This likely occurred due to the ability of 125I particles to ionize water molecules and cause direct damage to DNA. This affects the DNA repair mechanisms and can reduce AFP levels.

The CT perfusion imaging technique can effectively evaluate the hemodynamic changes of hepatocellular carcinoma tumors. This provides feedback on the micro-angiogenesis of tumor tissues and the surrounding tissues, which will direct the treatment of the cancer[12,16,23]. This study showed that after 3 mo of treatment the BV, PS, BF, HAF, and MTT measurements in the study group were lower than those in the control group, indicating that TACE combined with 125I implantation can effectively reduce perfusion levels of tumor lesions, which improves clinical efficacy. 125I particles implanted into tumor tissue release low-energy γ-rays, which exert direct killing effects, induce an inflammatory response, promote antigen-presenting cells such as macrophages to process and take up antigenic information, and promote B cells and T cells to participate in the tumor immune process[9,11]. In addition, the mammalian target of rapamycin pathway may form radiotherapy-specific proteins after several hours of irradiation. This activates lymphocytes, and the cytokine network regulatory mechanism is stimulated through the secretion of large amounts of cytokines, which activates tumor-specific immune processes to kill tumor cells. Related studies suggested that lower doses of γ-rays are more beneficial because they increase the responsiveness of lymphocytes, promote the production of antibodies, enhance the toxic effect on tumor cells, and improve the treatment effect[8,12].

This study confirmed that TACE combined with 125I implantation for the treatment of patients with advanced PHC could better inhibit the formation of blood vessels in tumor tissues and reduce the perfusion level of tumor lesions compared to TACE alone. Therefore, with the development of technology, the combined multidisciplinary treatment improves the anti-tumor effect and plays a synergistic role in prolonging the survival time of patients, which is worthy of further clinical research.

Primary hepatocellular carcinoma (PHC) is a malignant tumor with a high incidence in the Chinese population. Transarterial chemoembolization (TACE) is an effective treatment for PHC. Radioactive iodine (125I) therapy has been used in the treatment of advanced PHC, especially in patients with portal vein tumor thrombosis.

Due to insidious onset and atypical early symptoms of PHC, more than 80% of hepatocellular carcinoma patients are diagnosed with metastasis and are ineligible for surgical treatment. Therefore, it is crucial to develop effective treatment methods, such as TACE and 125I therapy. However, the data on the therapeutic effect of TACE combined with 125I therapy in PHC is scarce.

To investigate the short-term efficacy of TACE combined with 125I in patients with PHC.

Ninety-eight patients with PHC were recruited and randomly divided into the study group (n = 49, treatment with TACE and 125I therapy) and the control group (n = 49, treatment with TACE alone). The tumor length, alpha-fetoprotein (AFP) level, and computed tomography (CT) perfusion were recorded. Complete remission, partial remission (PR), stable disease and progressive disease were evaluated for all patients. Then, the efficacy was compared between the control group and the study group.

For advanced PHC patients, TACE combined with 125I implantation better inhibits the formation of blood vessels in tumor tissues and further reduces the perfusion level of tumor lesions compared to TACE alone. The combination of TACE and 125I therapy improves clinical efficacy and plays a synergistic role in prolonging the survival time of patients.

TACE combined with 125I implantation or other therapeutic methods, such as radiofrequency ablation, programmed cell death ligand 1 therapy, and immune therapy, should be investigated in advanced PHC patients in the future.