Supplementary Materials of This Article

Metabolic-associated fatty liver disease (MAFLD) is the commonest cause of abnormal liver function tests (LFTs). Current upper normal of limit (UNL) of LFTs was derived from a “healthy” population, where undiagnosed MAFLD and viral hepatitis might be suspected.

To evaluated potential implications of changes in UNL of alanine aminotransferase (ALT) in MAFLD.

Total 436 patients were enrolled; of these, 288 underwent liver biopsy. Setting a lower UNL reduced the percentage of those with significant disease despite normal ALT; specifically, patients with advanced fibrosis (F ≥ F3) or definite “metabolic-associated steato-hepatitis (MASH)” (NAS ≥ 5) within normal ALT decreased from 10% to 1% and from 28% to 4% respectively. However, the proportion of those with elevated ALT and no evidence of advanced fibrosis or “definite MASH” increased from 39% to 47% and from 3% to 19%. Overall, LFTs performed poorly in distinguishing “definite MASH” from simple steatosis (receiver operating characteristic areas under the curves 0.59 for ALT and 0.55 for AST).

Liver function tests might both under- and overestimate MASH-related liver disease. Reducing the UNL might not be beneficial and imply an increase in healthcare burden. Risk stratification in MAFLD should rely on a combination of risk factors, not on LFTs alone.

Core Tip: In the United Kingdom, the hepatologists receive increasing demand for secondary care services to investigate liver function tests (LFTs), especially with the suspicion of metabolic-associated fatty liver disease (MAFLD). With current upper normal limit (UNL), patients without liver diseases but elevated LFTs is high (27%), as well as those with significant fibrosis or metabolic-associated steato-hepatitis and normal LFTs (10%). Here, we aimed to evaluate the potential implications of changes in UNL of LFTs. Our data show that reducing the UNL would lead to an increase in overall healthcare burden. In MAFLD, the risk-stratification should rely on a combination of risk factors, rather than on LFTs alone.

Metabolic-associated fatty liver disease (MAFLD) is emerging as the most prevalent chronic liver disease worldwide secondary to the epidemic of obesity and metabolic syndrome. MAFLD also represents the commonest cause of abnormal liver function tests (LFTs) in Western countries[1]. Alanine aminotransferase (ALT) and aspartate aminotransferase (AST) are enzymes which transfer amino groups to different substrates, with ALT being more liver-specific[2]. Notably, the patient’s metabolic status (such as the presence of obesity and/or insulin resistance) may directly influence LFTs values[3,4]. Moreover, current upper normal limits (UNL) were derived in a population with highly-prevalent MAFLD but unrecognised as a disease entity at the time. As such, several studies have questioned whether current UNL of ALT should be revised although giving contrasting results[5,6].

LFTs are often the first-line investigation for any suspected liver disease with or without imaging[2]. However, the role of LFTs in diagnosing metabolic-associated steato-hepatitis (MASH)-related liver disease, such as the presence of advance fibrosis and/or steatohepatitis, is currently limited. In particular, the full spectrum of MAFLD has been reported in patients with normal LFTs[7,8]. Although histology represents the “gold standard” for diagnosing and staging MASH, the costs and invasive nature of the procedure limit its widespread applicability. Therefore, non-invasive markers are an established part of the investigation of MAFLD. In particular, transient elastography has been validated as marker of fibrosis and represents the typical second-line investigation for MAFLD[2,9].

The aim of this study was to evaluate potential implications of lowering the UNL of ALT in patients with a clinical or histological diagnosis of MAFLD.

We retrospectively assessed all consecutive referrals with a clinical or histological diagnosis of MAFLD followed-up at the Liver Unit of St. Mary’s Hospital, Imperial College Healthcare NHS Trust, from January 2010 to May 2017.

At the time of liver biopsy or Liver Stiffness Measurement, clinical parameters were recorded, including demographic, anthropometric and biochemical data. The use of steatogenic drugs, chronic alcohol consumption, as well as other liver disease were considered as exclusion criteria[9]. Fibrosis-4 index and non-alcoholic fatty liver disease (NAFLD) fibrosis score were calculated based on published formulas[10,11].

The conventional upper normal limit (UNL) of ALT from the Imperial College NHS Trust laboratory was 45 IU/L for men and 34 IU/L for women. The effect of the application of a lower value of ALT was then investigated. This UNL was set at 30 IU/L for men and 19 IU/L for women, in keeping with previous studies aiming to increase the sensitivity in diagnosing active chronic hepatitis C in the general population[5]. Similarly, this lower ALT UNL helped with differentiating active from inactive chronic hepatitis B carriers[12].

The distribution of variables was explored using the Shapiro-Wilk test. Since the variables were normally distributed, continuous variables were expressed as medians and SD, and categorical variables were expressed as relative frequencies. Differences between the groups were tested using one-way ANOVA for categorical and Mann-Whitney or Kruskal Wallis for categorical variables. Correlation was measured using Pearson’s Rho coefficient. Receiver operating characteristic (ROC) areas under the curves (AUROC) were used to assess the diagnostic performance of ALT and AST. Statistical analysis was performed using SPSS© (version 24.0; SPSS Inc. Chicago, IL).

Four hundred thirty-six patients underwent LSM. Overall, 330 (76%) patients had ALT higher than the conventional UNL, 73 (17%) had ALT within the conventional and the low UNL and 33 (7%) had ALT lower than the low UNL. AST and γ-GT levels only were significantly different between the three groups (P < 0.0001 and P = 0.008 respectively). There was no difference in terms of use of statin therapy between the groups (Table 1).

Using the conventional UNL as reference, 10% of the patients had evidence of advanced fibrosis (LSM ≥ 8.1 kPa) despite normal ALT. When the low UNL for ALT was applied, this percentage reduced to 3%. However, applying the low UNL determined also the increase in the proportion of those with elevated ALT but not showing evidence of advanced fibrosis (LSM ≥ 8.1 kPa) from 42% to 52% (Supplementary Figure 1).

In the whole population, there was no linear association between ALT and age, as Pearson’s correlation was not significant (Rho = -0.86, P = 0.07). Moreover, the distribution of ALT across age groups was similar when patients were further stratified per gender (Kruskal Wallis).

Using the conventional UNL as reference, 10% of patients had advanced fibrosis (F ≥ F3) on histology despite normal ALT. When the low UNL for ALT was applied, this percentage reduced to 1%. However, applying the low UNL determined also the increase in the proportion of those with elevated ALT but not showing advanced fibrosis from 39% to 47% (Figure 1). Similarly, lowering the UNL of ALT, the percentage of those with “definite MASH” (NAS ≥ 5) despite normal ALT decreased from 28% to 4%, whilst the percentage of patients without “definite MASH” but showing elevated ALT increased from 3% to 19% (Figure 2). 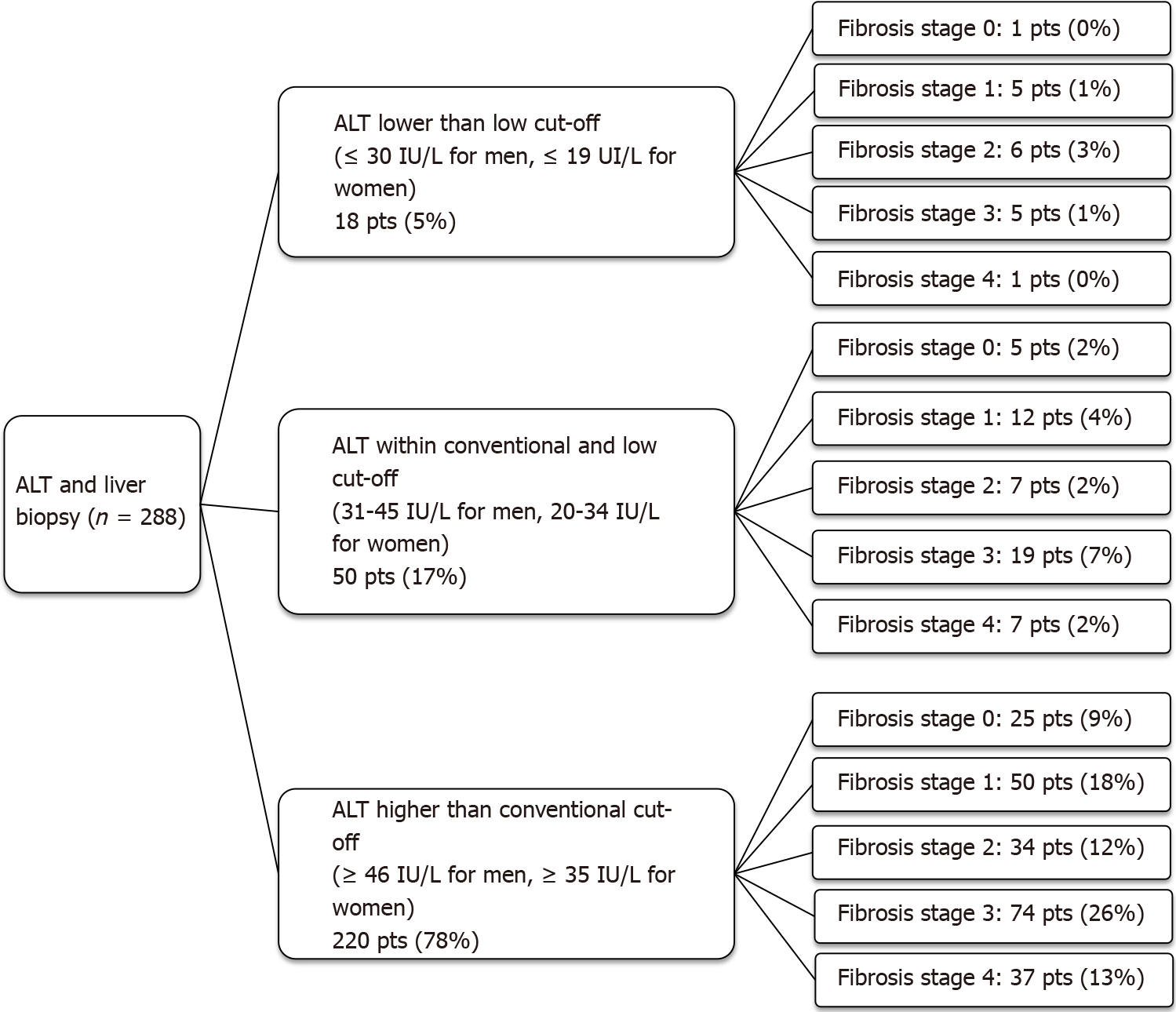 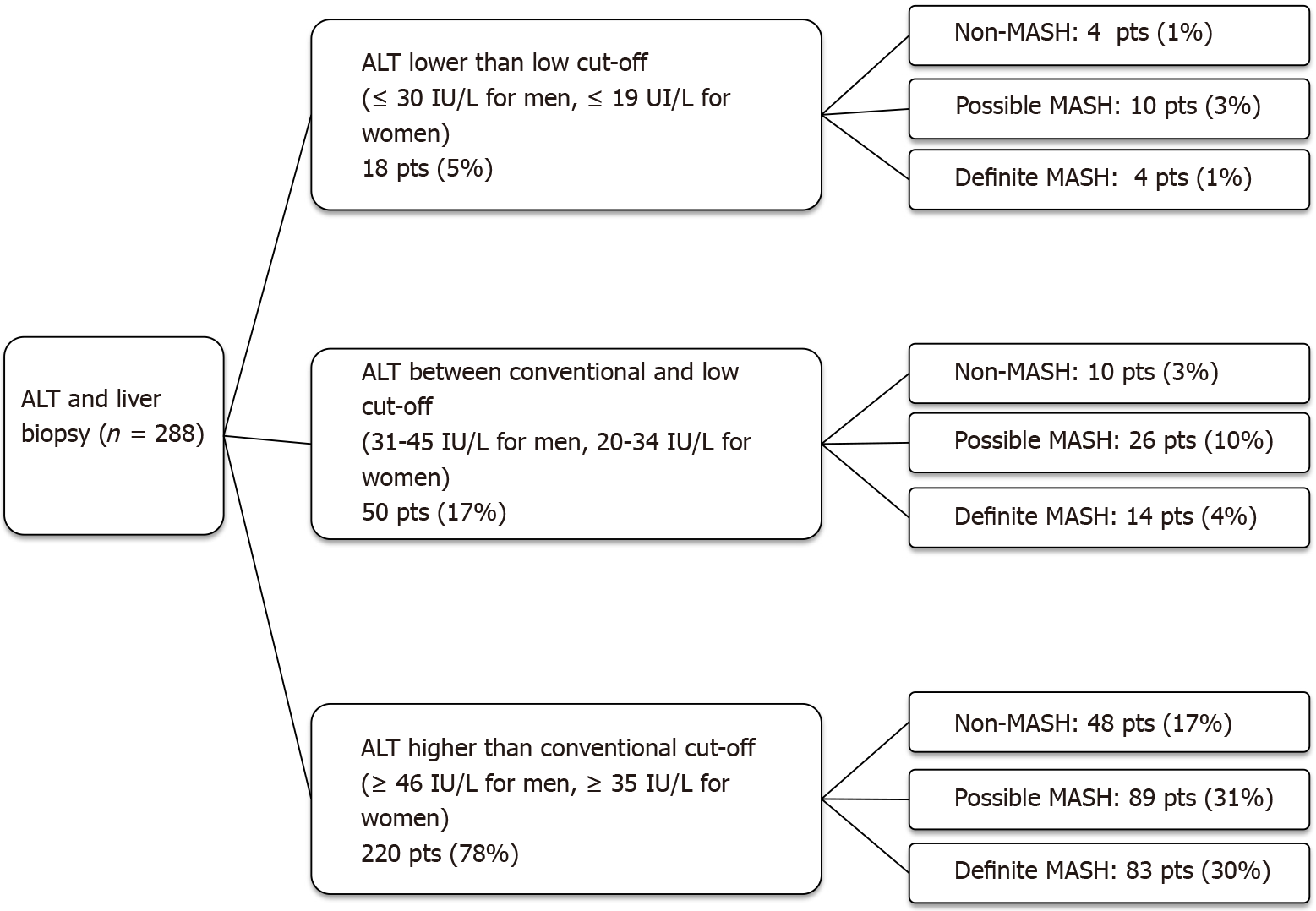 Advanced fibrosis (LSM ≥ 8.1 kPa) was diagnosed despite normal AST in 16% of the cases, while the proportion of those with elevated AST but LSM <8.1 kPa was 27%.

In the whole population, there was no linear association between AST and age, as Pearson’s correlation was not significant (Rho = 0.01, P = 0.99). Moreover, the distribution of AST across age groups was similar when patients were further stratified per gender (Kruskal Wallis).

Metabolic-associated Fatty Liver Disease is a major cause of chronic liver disease and the commonest cause of elevated liver enzymes[16,17]. In the UK, referrals for abnormal LFTs are increasing (> 300 referrals/year), and this often represents the first step in diagnosing MAFLD[18].

Several factors may influence ALT, such as age, gender, BMI, insulin resistance and triglycerides[3,4,19]. Overall, ALT is more commonly elevated than AST in chronic liver disease, with the notable exception of alcohol-induced liver injury[20]. Since transaminases are released following hepatocellular injury, AST and ALT are markers of cytolysis and not necessarily associated with inflammation or steatosis[21]. Nevertheless, LFTs are often used as a surrogate markers to assess the anti-inflammatory effect in clinical trials in MAFLD[22].

While the diagnosis and management of MAFLD has been streamlined in secondary and tertiary care centres, there is still a high variability in how the disease is assessed within the community. In particular, general practitioners (GPs) in primary care rely heavily on LFTs measurement, consistent with pragmatic guidelines which have been developed only recently in the UK[2]. It is also evident from a recent survey study that diagnosing MAFLD is perceived as challenging even to experienced GPs, with the overall perception of overlooking the disease especially in high-risk groups[23].

In this retrospective cohort of patients diagnosed with MAFLD, LFTs were frequently normal despite the presence of advanced liver disease. Moreover, transaminases could not distinguish simple steatosis from “definite MASH” (AUROC 0.59 for ALT and 0.55 for AST) at first referral, giving false reassurance in 10%-15% of patients. Conversely, decision-making based on LFTs alone might have implied unnecessary second-line investigations in approximately 27%-42% of cases. Our results confirm that non-invasive markers based on blood tests (i.e., FIB-4 and NAFLD fibrosis score) perform better than LFTs alone in assessing the severity of liver disease from NAFLD.

The actual normal ALT value is an area of ongoing controversy. Differences in the UNL used between studies are consistent, resulting from laboratory setting and populations tested[24]. Interestingly, the ALT normal range has been derived from “healthy” subjects in the general population[1], where MAFLD and obesity were highly prevalent[24]. Moreover, the UNL was first described in the 1980s, when LFTs were used to rule out ‘non-A and non-B hepatitis’ positivity amongst blood donors, in a time when anti-HCV antibodies were not available[25]. As such, both undiagnosed cases of MAFLD and chronic viral hepatitis may have contributed to the current definition of the UNL.

In this cohort, when a lower UNL was applied, the proportion of patients with advanced fibrosis or definite MASH on biopsy and normal biochemistry fell substantially, providing a rationale for revising current UNL. However, reducing the ALT normal range might lead to an increase in unnecessary second-line investigations (from 27% to 33% in based on histology this population) for a disease which is already highly prevalent in the general population. As a result, health costs would overwhelm the healthcare system with no clear clinical benefit[5].

Liver function tests might both underestimate and overestimate MASH-associated liver disease. Changing the UNL of ALT is not beneficial, as it might increase healthcare burden. Referral/management pathways and risk-stratification strategies are most needed for primary and they should rely on a combination of risk factors and non-invasive markers, not on LFTs alone.

In MAFLD, liver function tests may both under and over-estimate liver disease. Moreover, difference in upper normal limit (UNL) of LFTs is consistent across the literature.

As such, we investigated the potential use of different UNLs of LFTs in MAFLD.

We evaluated the use of a lower UNL of ALT vs histology and liver stiffness measurement in a cohort of 436 patients with non-alcoholic fatty liver disease in a tertiary care centre.

Modifying the upper normal limit of LFTs does not improve the diagnostic performance of the test in MAFLD.

In MAFLD, the risk-stratification should rely on a combination of risk factors and non-invasive markers, rather than on LFTs alone.

Corresponding Author's Membership in Professional Societies: European Association for the Study of the Liver.