Article-Type of This Article
Meta-Analysis

A literature search was conducted utilizing MEDLINE, EMBASE and Cochrane Database from inception through March 2018. We included studies that reported: (1) prevalence of pre-existing AF or incidence of AF following liver transplantation; or (2) outcomes of liver transplant recipients with AF. Effect estimates from the individual study were extracted and combined utilizing random-effect, generic inverse variance method of DerSimonian and Laird. The protocol for this meta-analysis is registered with PROSPERO (International Prospective Register of Systematic Reviews, No. CRD42018093644).

Atrial fibrillation (AF) is one of the most common heart diseases, affecting 3 to 6 million populations in the United States, almost 30 million people worldwide, which is expected to reach 50 million peoples worldwide in 2050[1-4]. Patients with AF carry a higher risk of adverse cardiovascular events and reduced survival[5,6]. Incidence of AF increases with age. At the same time, aging population is likely to develop other chronic diseases and one of them is end-stage liver disease or cirrhosis[7-9]. This treatment of cirrhosis comprises of multidisciplinary approach ranging from very simple, symptomatic treatment with diuretic or treatment of primary cause, down the road to the most advanced treatment; liver transplantation[10-13].

Liver transplantation is the treatment of choice for end-stage liver diseases[10,13]. In 2017, around 8000 patients all over the United State suffered from end-stage liver disease receiving liver transplantation and the number trends to increase 3% to 5% annually in the past 20 years along with the excellent outcomes with almost 95% survival rate at 1-year post-procedure and some patients could live even more than 30 years after liver transplantation[14-17]. Recent advances in basic and clinical sciences, including surgical technique, immunosuppressive therapy and postoperative supportive care, have led to the substantial improvement in quality of life and survival after liver transplantation[18,19]. In addition, higher risk patients tend to receive transplantation in a higher proportion than they did before. In the view of higher risk patients, they tend to carry the risk factors that accompany with older age such as cardiovascular diseases.

We registered this systematic review protocol with International Prospective Register of Systematic Reviews, No. CRD42018093644 (PROSPERO). We conducted a systematic literature search of EMBASE (between January 1988 and March 2018), Ovid MEDLINE (between January 1946 and March 2018), and the Cochrane Database of Systematic Reviews (from database inception to March 2018): (1) to estimate prevalence of pre-existing AF and/or incidence of AF following liver transplantation; and (2) to evaluate impact of pre-existing AF and post-operative AF on patient outcomes following liver transplantation. Ronpichai Chokesuwattanaskul and Charat Thongprayoon, two investigators, independently performed the systematic literature review using the search strategy that consolidated the terms of “liver” OR “hepatic” AND “transplant” OR “transplantation” AND “atrial fibrillation”, described in online supplementary data 1. No language restriction was implemented. We followed the Strengthening the Reporting of Observational Studies in Epidemiology (STROBE)[32] and the Preferred Reporting Items for Systematic Reviews and Meta-Analysis (PRISMA) statement[33].

Our inclusion criteria comprised: (1) clinical trials or observational studies such as cohort, cross-sectional, or case-control studies; (2) available data on prevalence of pre-existing AF or incidence of AF following liver transplantation or outcomes of liver transplant recipients with AF; and (3) available data on prevalence, incidence, odds ratios (OR), hazard ratios, or relative risks. Retrieved articles were individually reviewed for eligibility by the two investigators as mentioned prior. Inclusion was not restricted by the size of study. Contrarieties were discussed and solved through joint agreement. We used Newcastle-Ottawa quality assessment scale to assess the quality of study for cohort and case-control studies[34], as shown in Table 1.

We used a structured information collecting form to collect the data from individual article including last name of the first investigator, title, year of publication, country that the research was carried out, baseline characteristics of liver transplant patients, processes utilized to diagnose AF, prevalence of pre-existing AF, incidence of post-operative AF, patient outcomes following liver transplantation.

We used Comprehensive Meta-Analysis Version 3.3.070 software (Biostat Inc., Englewood, NJ, United States) for all analyses. Estimated prevalence, incidence and estimated risks from each study were incorporated by the random-effect, generic inverse-variance approach of DerSimonian and Laird[35]. Given the possibility of between-study variance, we used a random-effect model rather than a fixed-effect model. Cochran’s Q test and I2 statistic were implemented to assess heterogeneity caused by between-study differences. I2 values of 0%-25% indicate insignificant heterogeneity. I2 values of 26%-50% indicate low heterogeneity. I2 values of 51%-75% indicate moderate heterogeneity and I2 value of 76%-100% indicate high heterogeneity[36]. Egger test was used to evaluate publication bias[37].

Applying our search strategy, 121 potential studies were selected. Following the elimination of 83 studies (title and abstract clearly not meeting inclusion criteria due to study design, type of study, patient population or reported outcomes), 38 studies were included for complete examination. After the complete review, twenty articles were omitted because the outcome of interest was not provided and six articles were excluded since they were descriptive studies without data of interest. Hence, we included 12 articles[20-31] into the final analysis including 9 cohort studies[20,22-24,26-30] and 3 case-control studies[21,25,31] with 38586 liver transplant recipients were enrolled, as demonstrated in Figure 1. Study characteristics and quality appraisal of studies are shown in Table 1[20-31]. 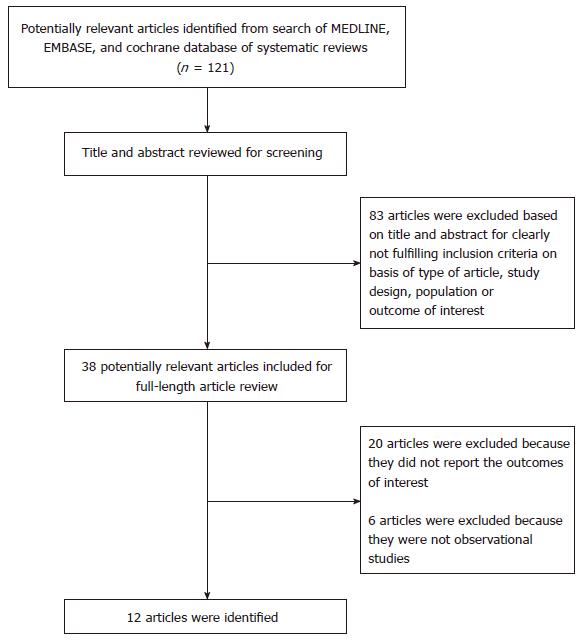 Meta-regression analyses were performed and showed no significant correlations between year of study and either prevalence of pre-existing AF (P = 0.08) or post-operative AF after liver transplantation (P = 0.54), as shown in Figures 4 and 5. 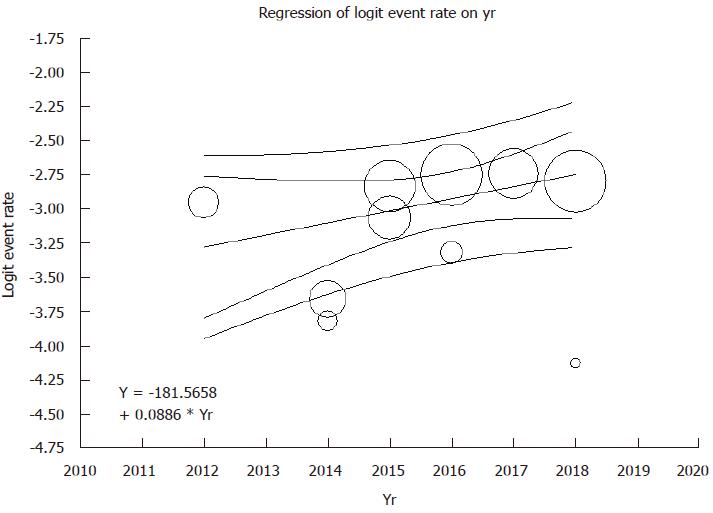 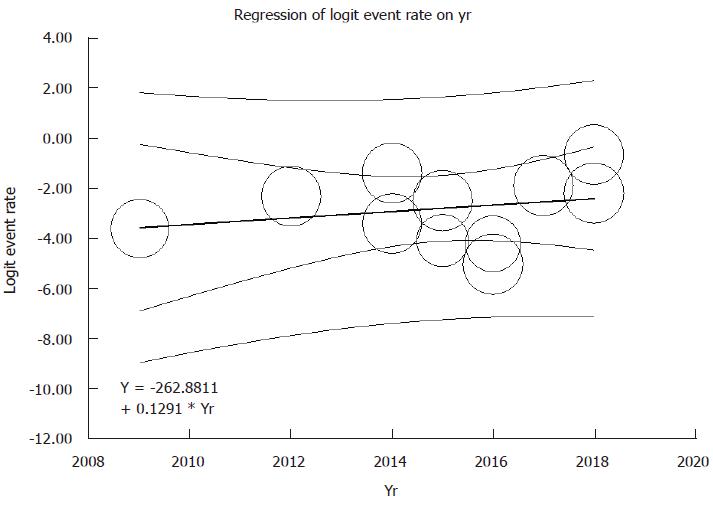 Risk of bias across studies

In general population, AF can put the patients at higher mortality risk, compared to those without AF[47]. In addition to mortality risk, our study also revealed the association of pre-existing AF and incident AF with poor clinical outcomes following liver transplantation. New-onset AF following liver transplantation is also associated with post-transplant acute kidney injury, cerebrovascular events, and increased risk of graft failure among liver transplant recipients. There are several mechanisms that put the liver transplant patients with AF at higher risk of postoperative morbidity and mortality compared to those without AF[24,48]. Patients with AF reflect that they are frail and have already been at higher risk profiles accompanying with other cardiovascular risks (left ventricular hypertrophy, heart failure, stroke, etc.) at the time even before liver transplantation, so that they will inevitably develop higher complication rates at postoperative period[21,49,50]. Furthermore, AF itself plays a critical role as marker of underlying heart diseases that make patients vulnerable to perioperative hemodynamic challenges[51,52].

There are also several mechanisms explained why liver transplantation promotes the occurrence of AF during postoperative period (Figure 6). Firstly, conventional postoperative hemodynamic challenge could provoke AF through hemodynamic instability or inotropic administration[50]. Also, some preexisting liver diseases, such as nonalcoholic fatty liver disease (NAFLD), share a common risk factor, that is diabetes and obesity, with the AF patients[53]. In addition, NAFLD could also occur as de novo after liver transplantation and subsequently enhances the postoperative complications, contributed by systematic inflammatory mechanism[54-56]. Furthermore, immunosuppressive therapy increases the risk to develop insulin resistance which eventually leads to metabolic syndrome[57]. Various kind of cirrhosis-specific heart diseases, such as a well-known entity called congestive hepatopathy, prior to transplantation play a substantial arrhythmogenesis role as a substrate for pathogenesis of AF[50,58]. Various underlying medical problems including AF would, in the future, be used to identify high-risk patient population that needs to be optimized the treatment to achieve higher outcome after liver transplantation. 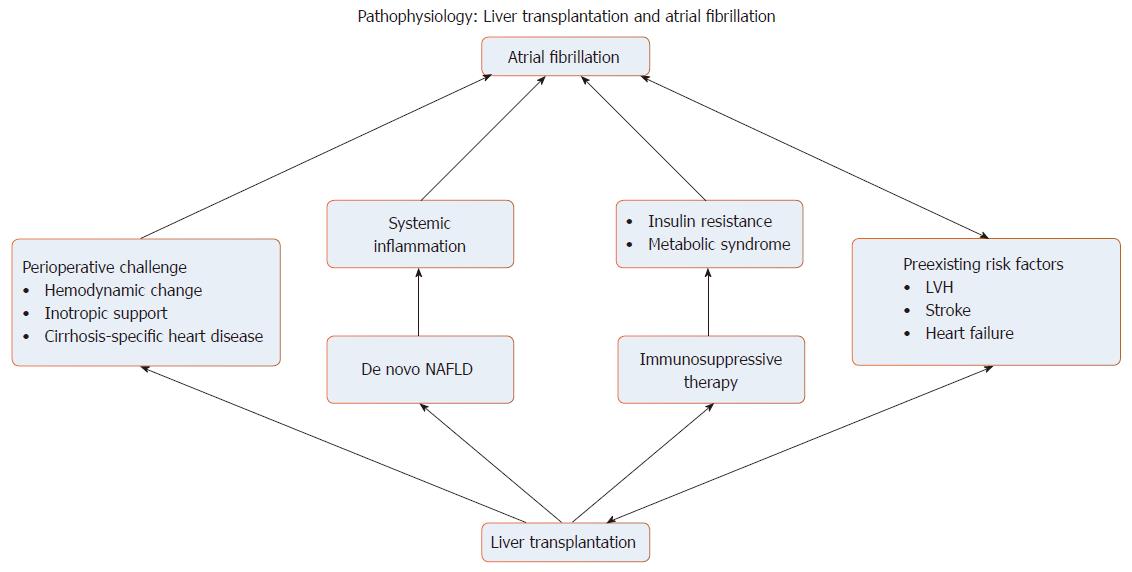 Leading cause of long term mortality in patients with liver transplantation is cardiovascular complications which, other than AF, include heart failure and myocardial infarction. These complications are predominantly driven by the development of metabolic syndrome after liver transplantation. However, this topic of interest is beyond the scope of our study and could be explained elsewhere[50]. More or less, these cardiovascular complications were also considered as potential risk modification strategy that should not be overlooked. Our study has noteworthy limitations. Firstly, an inconsistent in definition, for an example how to define the timing of AF as an early or late onset, among the different studies preclude to draw the generalized conclusion. Such this limitation, data use needs tailoring to the individual patient. Secondly, duration of follow up during the postoperative period by some study prospectively monitored a cardiovascular event for just 30 d post-transplantation, which this time frame does not long enough to reveal the long-term morbidity and mortality outcome. However, with the potential of higher morbidity and mortality in liver transplant patients with AF by our meta-analysis, future studies, preferable with population-based or national database studies, are required to discover whether focused AF cares for liver transplanted patients can improve patient outcomes after liver transplantation. Finally, since our study is a meta-analysis of observational studies, it could entirely prove association, but could not demonstrate a cause-effect (causal) relationship, between liver transplantation and AF.

Among liver transplant patients with atrial fibrillation (AF), there are lacks of data about incidence, prevalence and prognosis of AF in this specific group of patients. In spite of improvement of liver transplant care to the point of achieving almost 90% of 1-year survival rate, outcomes of liver transplantation related to AF remain unclear.

With excellent results of liver transplantation in term of survival, current indications of the transplantation have been extending into higher risk candidates due to higher amount of donors and more advanced treatment, which include preoperative preparation, surgical technique, immunosuppressive therapy and post-transplantation care. The high-risk liver transplant candidates tend to experience the adverse effects throughout perioperative period and worse outcomes, compared to those with less comorbidity. AF is one of the most common cardiac rhythm abnormalities and its prevalence increases with older age and higher comorbidities. Therefore, a number of patients with AF who received liver transplantation would definitely increase.

We conducted a systematic literature search of EMBASE, Ovid MEDLINE, and the Cochrane Database (from database inception to March 2018): (1) to estimate prevalence of pre-existing AF and/or incidence of AF following liver transplantation; and (2) to evaluate impact of pre-existing AF and post-operative AF on patient outcomes following liver transplantation. Estimated prevalence, incidence and estimated risks from each study were incorporated by the random-effect, generic inverse-variance approach of DerSimonian and Laird.

There were significant associations of AF with worse clinical outcomes following liver transplantation including 2.3-fold higher risk of death and 5.1-fold higher risk of postoperative cardiovascular complications, and poor clinical outcomes such as stroke, acute kidney injury and graft failure. We also showed the incidence of postoperative AF, namely 8.5%, consistently across different type of studies without the change overtime by meta-regression.

This systematic review confirmed higher risks of death and postoperative complications in liver transplant patients with AF. Our findings indicate that AF may be an independent predictor for worse clinical outcomes following liver transplantation.