Research Domain of This Article
Microbiology

Article-Type of This Article
Minireviews

Core Tip: Epstein-Barr virus (EBV)-associated gastric cancer (EBVaGC) tumor cells originate from a single cell clone infected with EBV. In contrast, it is reported that more than 95% of patients with gastric cancer have a history of Helicobacter pylori (H. pylori) infection. Accordingly, it has long been argued that H. pylori infection may have some effect on the development of EBVaGC, a subtype of gastric cancer. It is also a mystery that the number of gastric cancer patients is higher in Asia, South America, and the Middle East. We will reorganize the role of H. pylori and EBV infections in gastric cancer formation.

Epstein-Barr virus (EBV)-associated gastric cancer (EBVaGC) accounts for 10% of all gastric cancers. At the same time, more than 95% of patients with gastric cancer have a history of Helicobacter pylori (H. pylori) infection. Thus, the question arises as to whether H. pylori and EBV infections promote gastric cancer formation in a dependent or independent manner. The high prevalence of gastric cancer in Asia, South America, and the Middle East is also intriguing.

EBV IS AN ONCOGENIC HUMAN HERPESVIRUS

EBV infects B lymphocytes and epithelial cells and is an oncogenic virus that assists in the proliferation of latently infected cells, resulting in the development of Burkitt lymphoma, Hodgkin lymphoma, nasopharyngeal carcinoma, and EBVaGC[1].

More than 90% of adults are latently infected with EBV; however, cytotoxic T lymphocytes that recognize EBV antigens suppress the proliferation of viral antigen-positive cells. When the local or systemic immune function is compromised, EBV-positive cells begin to proliferate. B lymphocytes that migrate to local areas where immune surveillance is weak often transition to lytic infection, resulting in viral production. Under such conditions, EBV appears to be transmitted to and infects gastric epithelial cells. The expression of EBV genes causes epithelial cells to acquire proliferative properties and resist apoptosis, and cells that escape immunological elimination may begin proliferating[2].

Classification of gastric cancer by molecular mechanism was performed through an exhaustive analysis of next-generation sequencing data from numerous cases. The results divided gastric cancer into the following four molecular subtypes: Microsatellite instability (MSI), chromosomal instability (CIN), genomically stable (GS), and EBV[3]. These classifications have facilitated the identification of specific therapeutic candidates for each subtype of gastric cancer, and have revealed that each of these four subtypes is driven by a specific developmental mechanism that needs to be clarified individually. In particular, the molecular biology of EBVaGC is characterized by frequent and extensive methylation of the promoter regions of tumor cell genes[4]. De novo EBV infection induces DNA methylation in more than 3000 gene promoter regions within 4 wk[4]. However, methylation of the promoter of the mismatch repair gene MLH1, which is frequently observed in MSI, is not observed in EBVaGC[5]. In addition to inactivation by DNA methylation, the EBV genome binds to heterochromatin, a region of inactivation that causes aberrant activation of the region (enhancer infestation) and increases the expression of surrounding proto-oncogenes[6].

In EBVaGC, which accounts for 5%–10% of all gastric cancers, all tumor cells are infected with EBV. Endoscopy is the most informative method for diagnosing gastric cancer. EBVaGC is observed as a superficial depressed lesion in the upper part of the stomach. Using endoscopic biopsy specimens, EBV-encoded RNA in situ hybridization (EBER-ISH), stains all gastric cancer cells positive for EBER, even in the intramucosal cancer stage[7]. The histological hallmark of EBVaGC is lymphoepithelioma-like carcinoma, in which a diffuse lymphocytic infiltrate is observed around EBER-positive epithelial tumor cells[8]. Furthermore, EBVaGC tumor cells are derived from the proliferation of a single EBV-infected epithelial cell[8,9].

Many studies have shown a male predominance (2-fold) of EBVaGC, suggesting that the risk may exist in male lifestyle and occupational factors[10]. The percentage of patients with EBVaGC to those with total gastric cancer is higher in younger patients. In men, the proportion of EBVaGC decreases with increasing age, especially in patients with pyloric gastric cancer. In women, the decrease in the proportion of EBVaGC with increasing age is unclear. Consumption of salty foods that cause mech-anical damage to the gastric epithelium as well as exposure to wood and iron filings are associated with a higher EBVaGC risk[11].

EBVaGC is a gastric cancer with a relatively good prognosis. A Dutch study reported that EBVaGC is characterized by fewer lymph node metastases, less residual disease, and younger patient age, which results in longer disease-free survival[12]. Cohort study data from TCGA also reported that EBVaGC has the best recurrence-free period and overall survival compared to MSI, GS, and CIN subtypes[13].

EBVaGC tumors are frequently found in non-antral parts of the stomach[10,14]. In contrast, H. pylori-associated gastric cancer mostly occurs in the antral region[10]. Because moderate to severe atrophic gastric mucosa due to H. pylori infection was characteristically observed surrounding early gastric cancers, gastritis may play an important role in the tumorigenesis of EBVaGC[14]. Development of gastric cancer is supposed to follow the "infection, inflammation, and carcinogenesis" route, which consists of H. pylori infection followed by chronic gastritis, intestinal metaplasia, and cancer. In contrast, in the case of EBVaGC, it is controversial whether tumor formation is initiated by EBV-infected normal mucosal cells or promoted by EBV-infected cells in precancerous lesions[15]. Abe et al[16] performed EBER-ISH on 1110 sections of non-neoplastic gastric mucosal tissue from 300 cases and found 2 (0.18%) ductal-level EBER-positive lesions.

The mutual contribution of EBV and H. pylori in the carcinogenesis will be discussed later in the chapter “Inflammation and carcinogenesis”.

EBV infects B lymphocytes through the binding of the viral glycoprotein gp350 to the high-affinity receptor CD21, followed by binding of gp42 to HLA class II molecules, resulting in membrane fusion[17]. In contrast, when low-affinity co-receptors are used to infect CD21-negative epithelial cells, the infection efficiency is extremely low (Figure 1). 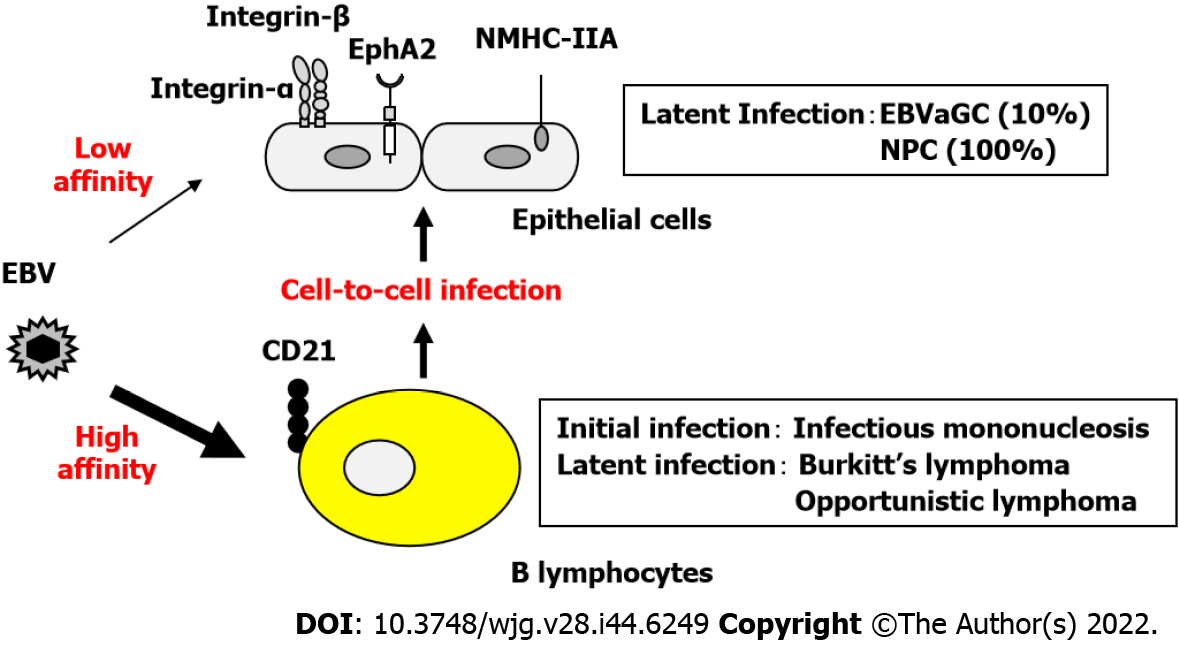 In EBVaGC, all tumor cells are infected with EBV. However, cell lines established from gastric cancer tissues, similar to those in nasopharyngeal carcinoma, are almost entirely EBV-negative[20]. The EBV genome in EBVaGC tumor cells exists as a plasmid-like episome that does not integrate into the host chromosomes. However, the presence of the virus does not appear to favor cell growth in vitro. Rather, it may be more convenient for in vitro cell growth to avoid the use of extra energy to maintain the episomes. Alternatively, the expression of viral genes such as microRNAs may be crucial for tumor cells to evade elimination by the in vivo immune system. In fact, EBV-positive KT cells established from EBVaGC can only be passaged by transplantation into SCID mice and cannot be expanded in an in vitro culture system[21]. SNU-719, YCCEL1, and NCC-24 are rare cells established from EBVaGC and can be propagated in vitro. These cell lines appear to be unique because the presence of EBV episomes is essential for their growth. Experiments with hydroxyurea and EBNA1 siRNAs were not successful in shedding the EBV episome from SNU-719 cells[22].

In addition to the oncogenic activity of EBV proteins expressed in type I latent infections, non-coding RNAs (miRNAs and EBERs) that are not translated into proteins have been investigated. Multiple BART miRNAs cooperatively repress lytic replication[29]. BART miRNAs also downregulate pro- and anti-apoptotic mediators such as caspase 3[30]. EBERs bind to protein kinase R and disrupt innate immune function[31]. Elimination of EBER2 from the EBV genome reduces the efficiency of B lymphocyte transformation[32].

It is very difficult to collect EBVaGC cases without H. pylori infection, because most patients with gastric cancer are infected with H. pylori[33,34]. However, a clinical study was conducted to investigate the relationship between EBV infection, H. pylori infection, and atrophic gastritis in 468 patients with chronic gastritis[35]. This study confirmed that patients who were EBV-positive had a lower pepsinogen I/pepsinogen II ratio than patients who were EBV-negative. EBV infection significantly increases the risk of atrophic gastritis, especially in H. pylori-negative patients. However, a report from Mexico mentioned that EBER1 in situ hybridization showed that EBV infection of epithelial cells could be detected in gastric cancers as well as in one-third of non-atrophic gastritis samples[36]. This study showed that EBV infection affected early cancer precursor lesions. However, it is difficult to determine whether EBV causes cancer directly or indirectly by triggering inflammation.

Inflammation and initiation of innate immune mechanisms promote EBV activation, although it is difficult to assess the extent to which these mechanisms are involved in tumorigenesis of EBV-infected cells (Figure 3). EBV proliferation occurs at the early stage of EBVaGC formation because early antigens-immunoglobulin G (IgG) and viral capsid antigen-IgG antibodies against early viral antigens and capsids are elevated in the sera of patients with EBVaGC. In addition, while the incidence of EBVaGC is approximately 10% worldwide, the incidence of gastric cancer after surgical invasion by gastric anastomosis increases by three times (30%)[8]. 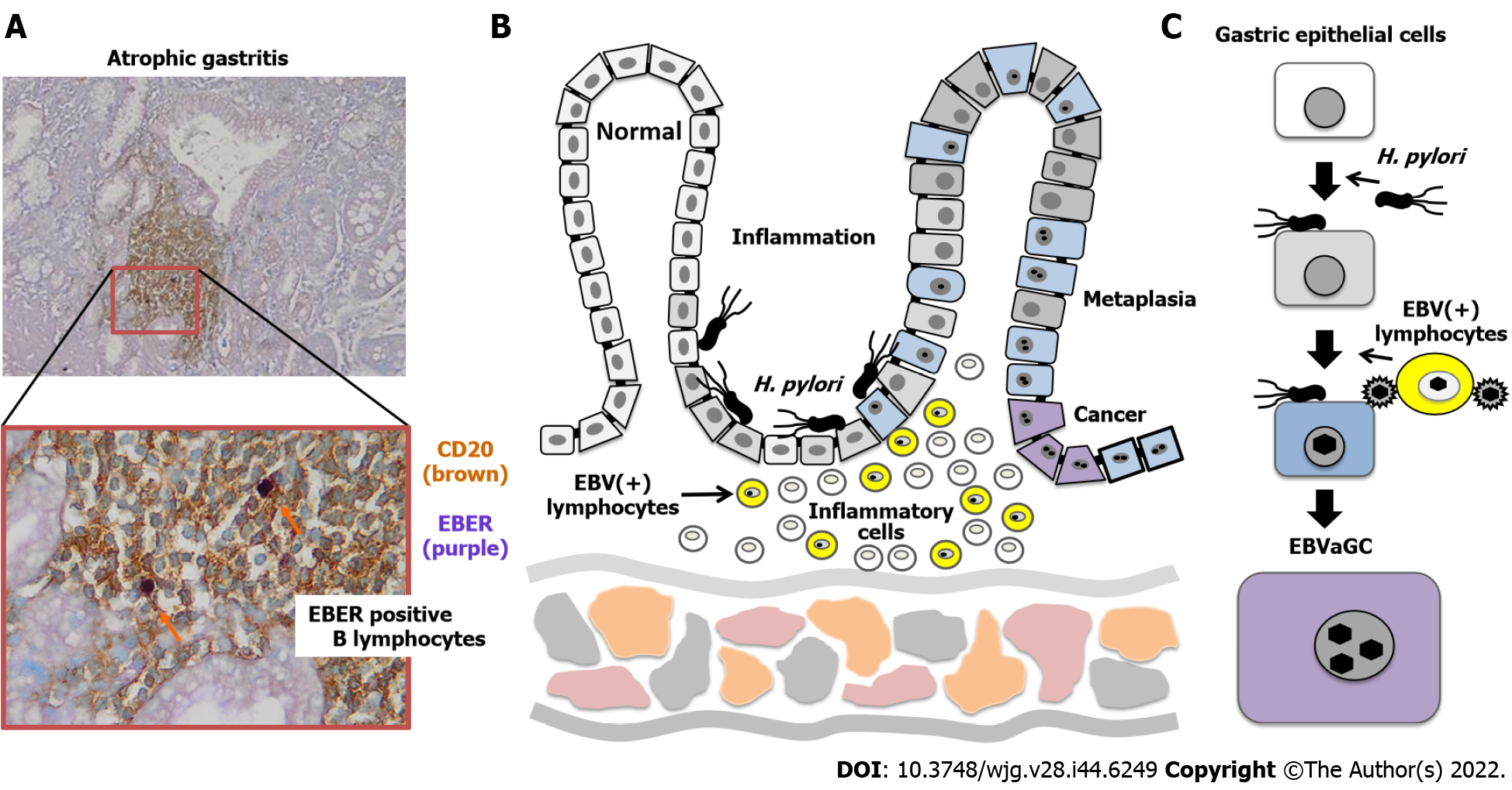 In contrast, EBVaGC is significantly associated with marked mucosal atrophy and moderate to marked lymphocytic infiltration, but there is no direct association with intestinal metaplasia[7]. Although this appears to indicate that EBVaGC is not directly associated with H. pylori infection, this result is consistent with our findings. This is because the intestinal metaplastic epithelium resulting from prolonged gastritis is an unsuitable mucosal environment for the growth of both H. pylori and EBV[38].

Furthermore, activation of innate immune signals by H. pylori attachment enhances the expression of the EBV co-receptor EPHA2 in gastric epithelial cells, thereby increasing the frequency of EBV infection in epithelial cells[41]. Another study demonstrated that organoids derived from gastric cancer cells were infected with EBV but did not infect those derived from the normal gastric epithelium[42]. The probable reason for this is that gastric organoids maintain cell polarity and express EPHA2 only between cells. Therefore, the localization of EPHA2 might change due to gastric epithelial cell injury caused by H. pylori infection or by a prior gene mutation, which subsequently facilitates EBV infection.

Multiple EBV episomal DNAs have been shown to approach enhancer sites in the genome, alter the surrounding chromatin structure (enhancer infestation), and activate genes such as transcription factors[6]. Although epigenetic analyses have been conducted to understand tumorigenesis, the overall mechanism remains unclear.

With the progress in research on EBER, miRNA, and long non-coding RNA, the functions of these molecules in latent EBV-infected cells are being elucidated. A highly tumorigenic B81 EBV strain was isolated from a patient with nasopharyngeal carcinoma[48]; however, an EBV strain unique to gastric cancer has not yet been isolated.

Host gene mutations frequently observed in EBVaGC, including changes in PIK3CA, ARID1A, PD-L1, and PD-L2[3] are considered to affect histological characteristics, clinical course, and response to treatment. EBV-induced tumorigenesis is believed to be affected by environmental factors such as previous infections; however, the molecular basis that characterizes EBVaGC remains to be elucidated.

Considering that EBVaGC most strongly expresses PD-L1 and PD-L2 among the four molecular subtypes of gastric cancer, immune checkpoint inhibitors are expected to be effective therapeutic agents for EBVaGC[49,50]. PIK3CA mutations and JAK2 amplification are frequently observed in EBVaGC. Therefore, PI3K and JAK2 inhibitors may be effective. Other EBNA-1 inhibitors are also expected to be EBV-specific therapeutic agents[51].